Qualifying Competition in Artistic Gymnastics comes to an end 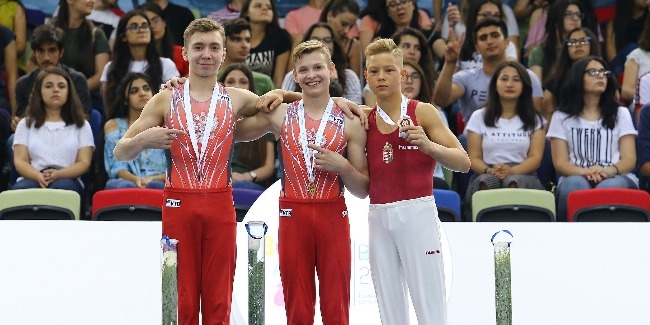 Today, Youth Olympic Games Qualifying Competition in Artistic Gymnastics has come to an end at Milli Gimnastika Arenası (National Gymnastics Arena). Our representative Samad Mammadli, distinguished himself by his persistent performances in the All-Around among 54 men’s artistic gymnasts from 29 countries, ranked 7 by scoring 77.931 points.

Our another representative in Men’s Artistic Gymnastics, Aghamurad Gahramanov didn’t fall behind his teammate with his decent performances. According to the results shown on 6 apparatus in total, he stopped on 21st place with 74.032 points.

In the qualifications among women, Samira Gahramanova scored 43.665 points in the All-Around and took the 28th place among 41 gymnasts.

According to the rules, first 17 athletes, being one athlete per country, both in Men’s and Women’s Artistic Gymnastics, are considered to qualify for the Youth Olympic Games to be held in Buenos Aires, Argentina on October 6-18, 2018. According to the preliminary calculations, representative of Azerbaijan Samad Mammadli also ensured qualification for our country for the Games.

However, list of qualified gymnasts is expected to be officially confirmed by the International Gymnastics Federation next week.