Results of the three-day championships 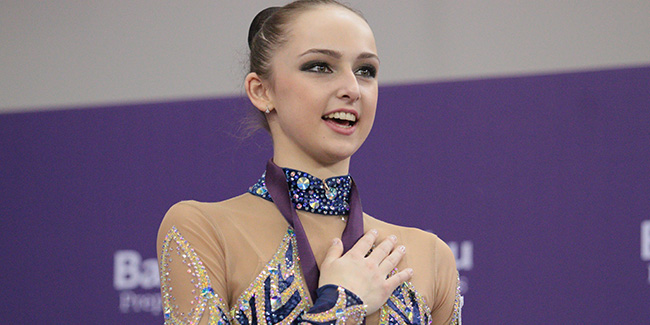 A three-day Open Joint Azerbaijan Championships in gymnastic disciplines wrapped up at the National Gymnastics Arena on March 6.

Mariia Smirnova (2) and Kristina Pravdina (2) who won golden medals distinguished among women. Smirnova won two golden medals on vault and in the floor exercise, while Pravdina has become an absolute national champion in the all-around events and on uneven bars.

Another Azerbaijani gymnast Marina Durunda secured a brilliant victory during the Championships. The athlete won the gold medal in the exercise with a ribbon, gaining 18,250 points. Moreover, she won two silver medals (ball, clubs) and a "bronze" for the hoop exercise. Gulsum Shafizada has brought two more bronze medals for the country   (all-around events, ball). Our group team won two "silver" for exercises with five ribbons and a combination of six clubs and two hoops. The second composition of the team brought "bronze" to the common fund, winning the all-around events.

Our acrobats also pleased everyone with their success. Women’s group of Aynur Huseynova, Lala Huseynova and Narmin Ramazanova won three golden medals in the all-around event, dynamic and balance exercises. Mixed pair (Diakova-Leonov) also won three medals - two "gold" for the balance and dynamic exercises and one "silver" in the all-round events.

Oleg Piunov became the champion in the individual trampolining competitions. Another "gold" Piunov won together with Ilya Grishunin, gaining 48.600 points from the judges.

Azerbaijani gymnasts to represent country at many major events; among them the European Games to be held in the same format as the Open Championships. More detailed information on the results of the competition can be found here.