RHYTHMIC GYMNASTS ARE THE FIRST ONES IN ITALY AND HUNGARY ... 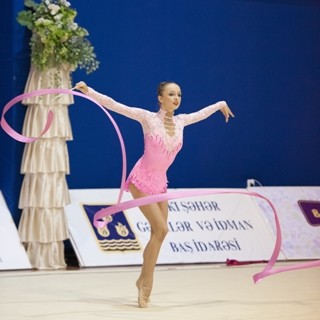 According to the press service of Azerbaijan Gymnastics Federation, A.S.D. Armonia d'Abruzzo-Chieti Club left behind other followers in many respects due to her performance. So, Durunda received 17.8 points for an exercise with a hoop, which became the highest result among her teammates and participants performing with this round apparatus. In total, A.S.D. Armonia d'Abruzzo received 100.95 points and already had 50 points on its credit side. Marina's club takes the 6-points lead over "Gynnastica" club from San-Giorgio, led by a world champion from Ukraine Ganna Rizatdinova. The third round - to be held on November 16 - in the capital of the former Olympic Games-2006, Turin.

And in Budapest, the capital-candidate for hosting Universiade-2019 which is considered as the world's second competitions in its importance after the Olympic Games, an international tournament among juniors came to an end, where gymnasts of "Neftchi" successfully performed, having won 3 gold and 2 silver medals.

So, Arzu Jalilova (born in 2004) became the winner of the tournament in the all-around and in an exercise without apparatus. And a rope brought her the second place. A 10-year-old Aziza Bayram won the event with a ball and Daniz Yusubova (born in 2005) won the silver medal with a rope.