SAMIRA MUSTAFAYEVA – A BRONZE MEDALIST OF THE TOURNAMENT IN SLOVAKIA 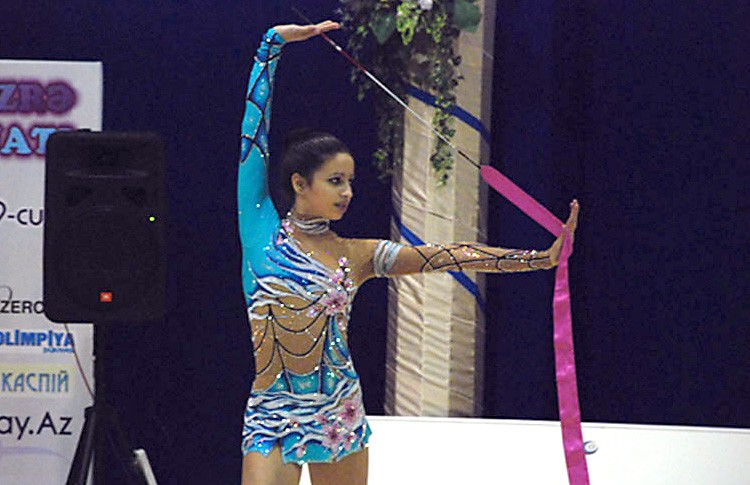 An Azerbaijani gymnast Samira Mustafayeva has won the bronze medal of the international tournament in Slovakia.

According to the press service of Azerbaijan Gymnastics Federation, she took the third place in the final exercise with a ribbon having received 23.85 points. Mustafayeva mounted the medal podium together with sportswomen from Belarus and Russia at the central sports complex of Bratislava.

“And in other final competitions with a rope and a ball Samira needed just few points to win prize-winning (third) places and she became the fourth. And she took the eights place with a hoop among eight finalists. As to the all-around, she took the 6th place having received 92.275 points.

“I think her performances were stable but as a coach I cannot be content with her present result. We have to work a lot,” the gymnast’s coach Marina Govorova said.

Within the framework of preparation for the European Championships starting in Baku in a month, another Azerbaijani gymnast Anna Gurbanova performed in the Grand Prix tournament held in Kiev.

Anna won the 8th place and received 96.85 points in the all-around. She gave her best result with a rope and took the 6th place with 24.875 points. The floor’s hostess Anna Bessonova, who had not been performing in large-scale competitions since the beginning of the year, became the winner. She took more than 5 points lead over a Russian Darya Kondakova. The third place was taken by Irina Risenzon from Israel.

From Kiev, Anna Gurbanova will set out for Portimao, the city in Portugal, where she will take part in the World Cup, together with her team-mates - Aliya Garayeva, Samira Mustafayeva and senior group team (Vafa Huseynova, Dina Gorina, Anastasiya Prasolova, Valeriya Yegay, Jeyla Guliyeva and Nigar Mirzayeva) on April 17-19. There will also be held an international tournament, where an Azerbaijani junior group team (Sabina Abbasova, Nigar Abdusalimova, Yevgeniya Jidkova, Ayelita Khalafova, Kamila Mammadova and Lala Maharramova will take part in.

One more international tournament will be held at the end of this week. Competitions among juniors will be held in Astrakhan on April 15-18, where Azerbaijan will be represented by Ekaterina Prokopenko (born in 1997).