SECOND DAY OF THE EUROPEAN CHAMPIONSHIPS IN RHYTHMIC GYMNASTICS 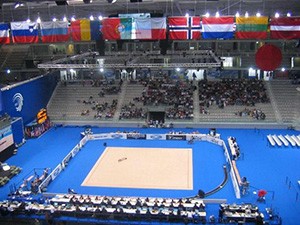 Today is the second day of the European Championships events in rhythmic gymnastics in Turin. The morning part has begun with the junior gymnasts’ tournament who continued their performances with two remaining apparatuses: a ball and a ribbon. An Azerbaijani gymnast Samira Mustafayeva demonstrated the exercise with a ball and received from the judges 23.125 points – 12th place. Nigar Abdusalimova performed with a ribbon and received 20.975 points - 23rd place. Thus, the total point of these two gymnasts’ team in four exercises – is 88.7 points. And the evening part of the events will be the most interesting part for the gymnastics fans – the final of the all-around among seniors. Our gymnasts Aliya Garayeva and Dinara Gimatova will compete for the title of the Continent’s Best Gymnast.