SECRETARY GENERAL OF AZERBAIJAN GYMNASTICS FEDERATION IS ELECTED AS THE VICE-PRESIDENT OF THE EUROPEAN UNION OF GYMNASTICS! 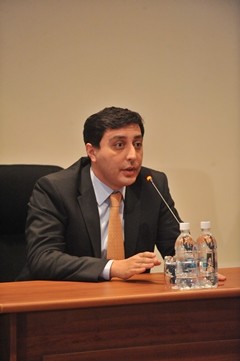 Good news has come from Slovenian Portorož resort city where the 25th electoral Congress of the European Union of Gymnastics (UEG) came to an end. The forum's participant within the Azerbaijani delegation, the Secretary General of National Gymnastics Federation (AGF), Farid Gayibov, was elected as the UEG Vice-President!

For the first time, the Azerbaijani representative entered the European gymnastics governing body. Delegates from 23 countries voted in his favor, thus, constituting the majority.

Starting from next year, F. Gayibov, along with two other Vice-Presidents from Sweden and Switzerland elected for the second time, will take part in different meetings of the authority, the European Championships.

We would like to mention that Farid Gayibov has ten years hands-on experience in development and advancement of gymnastics for the purpose of its becoming one of the mainstream sports disciplines in Azerbaijan. He also has an extensive experience in managing and coordinating large-scale international events in rhythmic gymnastics, as well as national championships in different gymnastics disciplines. The work carried out led to his election as the member of the Council of the International Federation of Gymnastics twice.