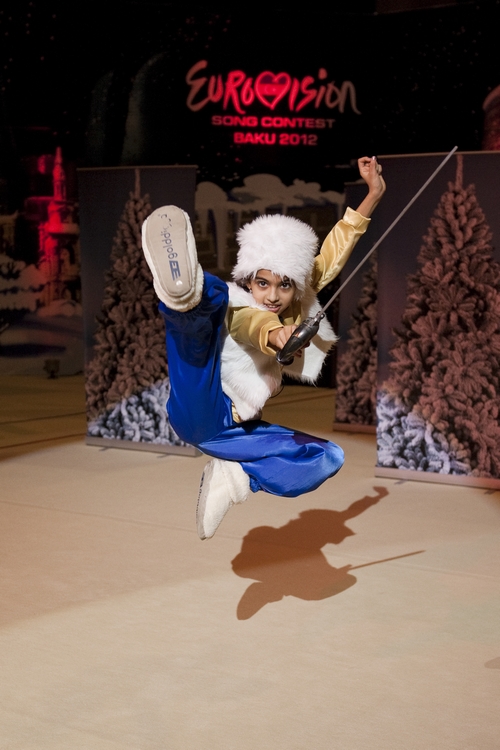 “Jirtdan and Grinch” New-Year’s fairy tale-show, to the kiddies’ joy, took place with a participation of the Azerbaijani national team’s gymnasts at Baku Olympic Sports Complex. The children come for a festival, besides New Year’s presents with sweets and soft toys, saw a colorful performance as well.
The evildoer Grinch’s part, who stole the New Year’s main symbol – Christmas tree, was splendidly played by the Azerbaijani national team’s gymnast Zeynab Javadli. And the Jirtdan’s part, who struggled against Grinch, was acted by Laman Hajizada, a junior gymnast already making great progress both on Republican and international arenas. The country’s group team’s member Ayelita Khalafova acted as the presenter (Jirtdan’s grandmother) who was rocking herself to and fro in the arm-chair and telling the spectators tale of how Good always won a victory over Evil. As usual, masterly performances were demonstrated on the floor by the Azerbaijani senior and junior group collectives, a number of individual gymnasts, coaches, choreographers and … even the national team’s doctor!
People gathered in the hall could watch the performance of trio gypsies, a part of one of which was played by the team’s head coach Mariana Vasileva. In whole, a great number of both popular Azerbaijani (from the repertoire of Muslim Magomayev, Emin Aghalarov and others) and foreign melodies were sounded at the show.
At the end of Gala, which was a great success, all its participants expressed their gratitude to President of Azerbaijan Gymnastics Federation Mrs Mehriban Aliyeva for her contribution to our sportswomen’s successes who repeatedly made us glad with their prize-winning places at the competitions of the highest level in 2011.
The participants proudly mentioned the 20th anniversary of independence of Azerbaijan, congratulated President of Azerbaijan Mr. Ilham Aliyev, the head of the country’s National Olympic Committee, on his forthcoming 50th birthday, whose efforts in successes of the whole Azerbaijani sports were inestimable.