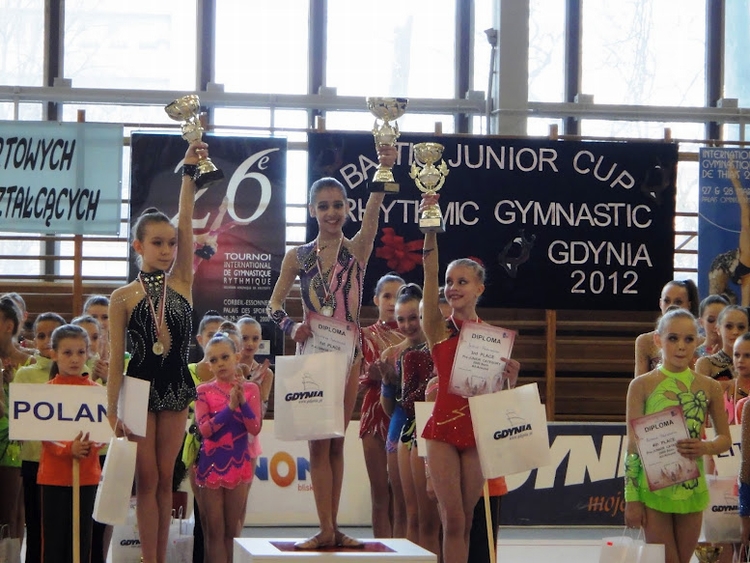 Junior Azerbaijani gymnasts continue to perform successfully at the international tournaments in the countries of Eastern Europe. Following the bronze medals won by them in a team competition in Kiev, there was a turn to prove themselves with separate apparatus as well.
According to the press service of Azerbaijan Gymnastics Federation, Polish city Gdansk was “taken” first where Gulsum Shafizada won a victory in the all-around in the tournament of 14-year-old gymnasts and the second place was taken by another gymnast from Baku Nilufar Niftaliyeva. The winner also has the “gold” with a ball and clubs, as well as the “silver” with a ribbon and the “bronze” with a hoop in her account. The second gymnast’s results are more modest: the second place with a hoop and the third one with clubs and a ribbon.
And the organizers of the tournament in Poland placed the banner of Azerbaijan into the middle frame of the flagstaff for more three times. It was facilitated by impeccable exercises of a third participant from Azerbaijan Zuleykha Ismayilova (born n 2000) with a hoop, a ball and in the all-around.
As to the second event in neighboring Hungary, a 12-year-old Zhala Piriyeva was more skilled and artistic, in one word she was a head higher than all other gymnasts of her age and she deservedly won the gold medal. But Mansura Bagiyeva (born in 1997) was less successful. A mistake in the all-around cost her the first place – the silver medal. Yekaterina Prokopenko (1997) took the 4th place.
“Of course, I am content with the results, and, especially, with the fact that the girls left a good impression on specialists and the audience,” the Azerbaijani national team’s head coach Mariana Vasileva emphasized. In my opinion, it must encourage them to push themselves to the limit of the working process in order to demonstrate their abilities to the maximum at the European Championships in Russia.
“And this week-end, junior gymnasts will take part in the qualification tournament of “Alina 2012” festival to be held in Nijnekamsk