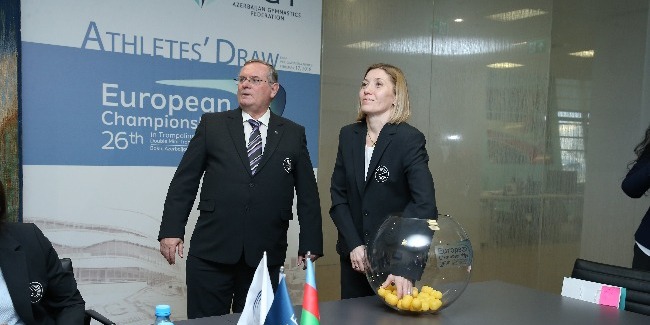 Today, at the office of Azerbaijan Gymnastics Federation (AGF), there was held a draw ceremony of the 26th European Championships in Trampoline, Tumbling and Double Mini-trampoline to be hosted by Baku for the first time.

President of the European Union of Gymnastics - Farid Gaibov, President of the UEG Technical Committee in Trampoline Gymnastics - Vladimir Zeman, its 6 members - Babette van Wetering, Irina Karavaeva, Luis Nunes, Patrick Siegfried, Mariela Stoycheva and Konrad Bojakowski, as well as AGF officials and the members of the Local Organizing Committee were participating in the draw ceremony.

The president of the committee, Vladimir Zeman, explaining the draw procedure, noted that the draw for the Championships will be held between seniors and juniors in 4 categories both among men and women - individual and synchronized trampoline, tumbling and double mini-trampoline.

The Committee’s President emphasized that the countries would first be divided into groups according to the results of the European Championships’ team competition held in 2016. Then, new countries with teams as well as gymnasts performing only in the individual program will be added into the groups.

The names of the countries and their performance groups were pronounced by Irina Karavaeva, member of the Technical Committee and the first Olympic champion among women in trampoline gymnastics.

It should be noted that members of the UEG Technical Committee have been in Baku for 2 days to hold the drawing ceremony, as well as to have discussions with the Local Organizing Committee and to check the preparation level of the Field of Play for the Championships.

It should be mentioned that the European Championships to be held on April 12-15, will be a qualifying event for the Youth Olympic Games-2018 in Buenos Aires (Argentina) for the junior gymnasts, as well as for the European Games-2019 in Minsk (Belarus) for the seniors.