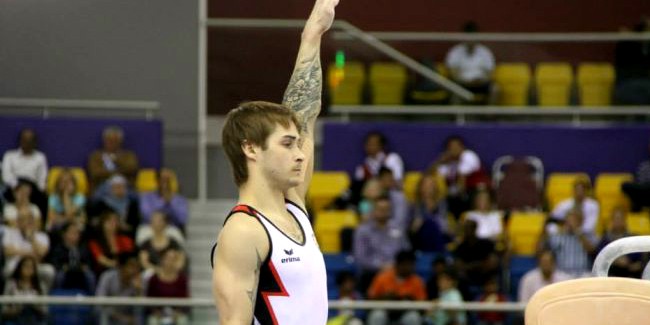 Azerbaijani gymnast Oleg Stepko won the gold medal at the World Challenge Cup in artistic gymnastics, which ended this holiday weekend in the Bulgarian city of Varna.

Stepko reached all the finals (!) and showing a brilliant exercise on his favorite apparatus - parallel bars, he climbed to the top of the pedestal of honor.

Moreover, Oleg won two silver medals - for the exercises on the pommel horse and vault. Follwing the results of the exercise on the horizontal bar, our gymnast stopped a step away from the bronze medal.

At the same time and in the same city there was the World Cup in acrobatic gymnastics. Women's and men's groups, pairs and mixed pairs compete for the medals.

All our acrobats reached the finals, but in the final stage they were unable to won the medals. Alibayov and Gulmammadli ranked sixth, as our women's group, while Leonov and Diakova took eighth place.

At the same time with the World Cup Varna hosted an international tournament in acrobatic gymnastics among juniors. This tournament has brought six medals to Azerbaijani team. Our mixed pair of Agasif Rahimov and Nurjan Jabbarli won two "gold" and one "silver" medals. Men's pair of Murad Akbarov - Seymur Jafarov also remembered with their successful performance, finishing third three times in a row.