SUCCESSFUL DEBUTS IN BUDAPEST AND BAKU 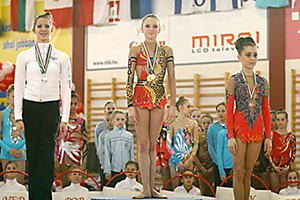 The gymnast Zeynab Javadli’s four medals and successful debut of a junior Saida Abdullayeva in the tournament in Hungary, the participation of a group team of Azerbaijan and Anna Gurbanova in the Grand Prix finals in France, as well as prize-winning places of gymnasts from Balakan and acrobats from Devechi in the country’s championships – are in the digest of competitions held recently.

The banner of Azerbaijan was raised five times in the course of rewarding ceremony in the tournament in Budapest. Zeynab Javadli won three silver medals: with a hoop (15.292), with a ribbon (15.175) and in the all-around (45.358 points) after a Hungarian gymnast Dora Vass. She took the third place only in exercises with clubs, having received 14.892 points.

The medal winning mood of a more experienced friend passed on to a very young Saida Abdullayeva performing in the international tournament for the first time. Her natural uneasiness was overcome by an elegant rope, which changed the competition debutant into a bronze medalist (22.317) within 1,5 minutes of her performance.

Another Azerbaijani junior Samira Mustafayeva performed in the international tournament in France. According to the results of the all-around, she took the 5th place among 17 participants.

The events of the second lap of the Grand Prix took place at the same time with this tournament. Having received 30.884 points (4th place) and taking the lead over traditionally strong teams of Spain and Greece, a group team took the highest place among our representatives. The collective became the fifth in separate finals twice.

After four exercises, Anna Gurbanova won the 6th place among 24 competitors. She became the fifth and sixth in the finals two times.

Four of Azerbaijani artistic gymnasts set off for the training camp in Belarus and Russia. According to the press-service of Azerbaijan Gymnastics Federation, Shakir Shikhaliyev, preparing for the European Championships to be held in May, is taking part in the training camp in Minsk. And Farid Aghazada, Murad Tatliyev and Mirvagif Baghirov are in the training in St. Petersburg. During their absence, the country’s championship took place in Baku, which was remembered with a participation of gymnasts from Balakan. The debut turned out to be successful: young Mehdi Musayev, Zaur Sheshdarov, Ilyas Ganjayev, as well as Gunay Mammadli, Diana Mehdiyeva and Aynur Ganjayeva became the prize-winners in their age groups. Elvin Aghadadayev from MOIK celebrated the victory among masters of sports.

Sportsmen from the country’s regions were also among the strongest gymnasts in Azerbaijan championship in acrobatic gymnastics. Thus, the man’s group from Davachi, consisting of Saddam Omarov, Aghabala Aghayev, Azer Abbasov and Suleyman Hamidov, became the winners in the first grade. A woman’s pair Afag Maharramova-Parizad Guliyeva from Baku gymnastics school and their club-mates in a mixed duet Faig Sultanov-Tamara Babakishiyeva were the best among masters of sports.