SUMMING UP THE RESULTS OF THE YEAR... 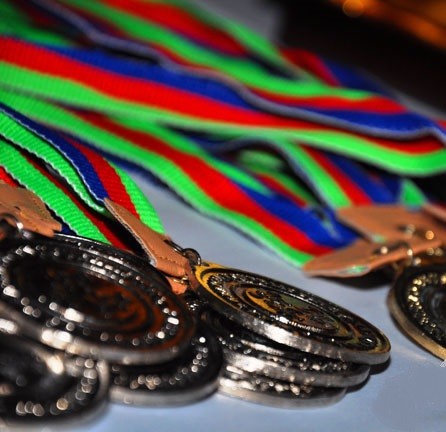 According to the press service of Azerbaijan Gymnastics Federation (AGF), the most important title won at the beginning of a new Olympic cycle is considered to be the junior group team's silver medal. Nilufar Niftaliyeva, Gulsum Shafizada, Sabina Hummatova, Aliaksandra Platonova, Emilya Bagiyeva and Aynur Mustafayeva took the second place at the European Championships' final in Vienna.

The leader in the individual all-around by quantity of the awards won became Marina Durunda. There are 14 medals on her credit side, four of which are gold. Alternation of generations after Aliya Garaeva's leaving the big-time sports turned out to be successful. Durunda and her teammate Lala Yusifova were remembered with their spectacular performances at the European and World Championships' finals.

As to other gymnastics disciplines, the young gymnasts Kamran Hajiyev and Anton Yashin, women's and men's pairs of acrobats Aynur Huseynova-Narmin Ramazanova, Lala Huseynova-Khoshgadam Guliyeva and Elchin Guliyev-Emin Gulmammadli, as well as a jumper on acrobatic track Mikhail Malkin steadily became the winners and medalists of various competitions.

AGF has begun to develop two more Olympic disciplines - women's artistic gymnastics and trampoline. And, there were already won the first medals in these disciplines, one of which - the gold - won by an artistic gymnast Anna Pavlova.

At the same time, the construction of the National Gymnastics Arena, which hosts next year's Rhythmic Gymnastics European Championships and the Continent's Games- 2015, as well as the main training hall are under completion.

The FIG Academy for Rhythmic Gymnastics Coaches Level 1 (Level 2 to take place in Baku on January 11-18, 2014) were held in the capital, Azerbaijan was assigned to organize the Rhythmic Gymnastics World Championships in 2019, the 2009's European Champion within the women's pair, Ayla Ahmadova, was elected acrobats' representative  in the FIG Athletes' Commission, AGF representative Mehman Aliyev became a member of the Disciplinary Commission of the FIG, and AGF's Secretary General Farid Gaibov - elected as the Vice-President of the UEG.