The 35th World Championships are over 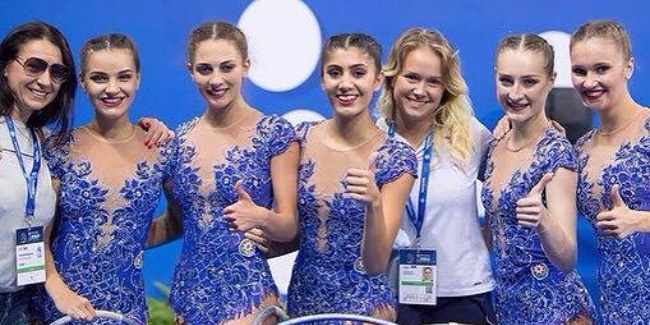 On August 30 - September 3, Pesaro (Italy) hosted the Rhythmic Gymnastics World Championships. Azerbaijani representatives were also taking part in the tense contest for the title of “Champion” at the Adriatic Arena, where the world’s strongest gymnasts from 53 countries had gathered. First, the tournament commenced with the performances of individual gymnasts. In this program, our country was represented by Ayshan Bayramova, also performing within the group, as well as by Zohra Aghamirova. Ayshan, having demonstrated her performances with four apparatus, ranked 26th among 90 gymnasts in the all-around. Our young gymnast, Zohra, first time experiencing a thrill of the World Championships, took the 27th place in the all-around and stopped a step behind her teammate.

The last two days of the tournament were remembered with the performances of the teams in group exercises. Our team, consisting of Siyana Vasileva, Diana Doman, Zeynep Celep, Aleksandra Platonova and Ayshan Bayramova, ranked 7th among 29 teams in the all-around according to the results of both compositions. Afterwards, our girls executed their routines in apparatus finals. In the finals, they were 5th with the hoops and the 7th with 3 balls and 2 ropes.