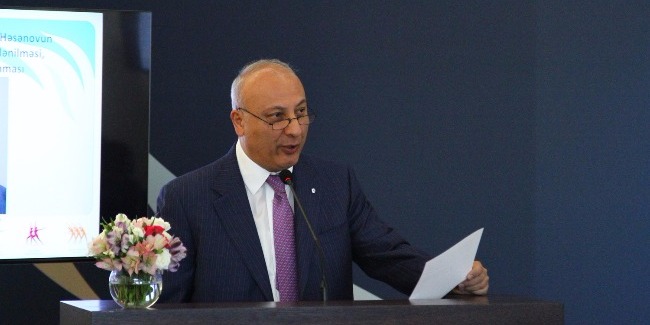 Reelection of gymnastics Federation’s present leadership and its further activity plan in gymnastics development in Azerbaijan were the main points of the agenda.

According to the results of the voting, First Lady of the country Mehriban Aliyeva was unanimously elected as President of the Federation for the fourth time. Deputy Head of the Protocol Service of the President of the Republic of Azerbaijan Altay Hasanov was reelected for the post of the Vice-president. By voting, there had also been confirmed members of the Executive Committee for the next 5 years – a member of the Parliament (Milli Majlis) Rauf Aliyev, director of Sports-Concert Complex named after Heydar Aliyev and a Head Coach of the Azerbaijani Rhythmic Gymnastics National Team Mariana Vasileva.

At the Assembly, A.Hasanov made a report on the work carried out within the last five years’ period. In his report, newly reelected Vice-president spoke about successes achieved in all 6 competitive gymnastics disciplines as well as joining of the country’s representatives to the 7th non-competitive one. A. Hasanov emphasized that hosting of the 1st European Games by our country paved the way for establishment and development of 3 gymnastics disciplines like women’s Artistic Gymnastics, Trampoline Gymnastics and Aerobic Gymnastics. Talking about 7 medals won by gymnastics representatives at the European Games, as well as results at the continent’s and World Championships, he stated: “Our artistic gymnast Oleg Stepko entered into history as the only Azerbaijani sportsman who won 5 medals of the European Games. He has 1 “gold”, 2 “silver” and 1 “bronze” in his individual account. And, in a team competition, he, together with his teammates, Eldar Safarov and Petro Pakhnyuk, took the 3rd place.  Silver medal of Marina Durunda and Ilya Grishunin’s “bronze” opened a new page in history of Azerbaijan gymnastics.”

Afterwards, A. Hasanov especially emphasized significance of qualification for the forthcoming Olympic Games 2016 by the representative of rhythmic gymnastics school established in Baku, Marina Durunda, as well as by artistic gymnast Oleg Stepko, who obtained this right having won the Worlds’ bronze medal for the first time in history of independent Azerbaijan in this gymnastics discipline.

As for non-Olympic disciplines, A. Hasanov mentioned silver and bronze medals of men’s (Seymur Jafarov - Murad Akperov) and mixed pairs (Aghasif Rahimov - Nurjan Jabbarli) at the European Age Group Competitions in 2015 accordingly for the first time in history of Acrobatic Gymnastics as well. According to him, our representatives in Aerobic Gymnastics performed with dignity at the European Games, and, several months later reached the final of the continent’s Championships.

The fact mentioned in the report of the Vice-president that not only national teams’ members in gymnastics disciplines were enjoying the conditions created at MGA but athletes from Europe, Asia, Africa, North America, even from the Oceania zone taking part in the training camp in our city, was remarkable in itself.

In addition, A. Hasanov spoke about the third Rhythmic Gymnastics European Championships held in our capital in 2014 where our team in group exercises won the silver medal, as well as about the FIG Academy held for rhythmic gymnastics coaches in 2013 and 2014, judges’ courses in new gymnastics disciplines including trainings held for the purpose of raising of qualification level of local specialists. The Vice-president also stated that 10 gymnastics sections operated in regions of Azerbaijan at present.

Speaking about the further development plan, A. Hasanov mentioned that Azerbaijan Gymnastics Federation will host World Cup series in 3 gymnastics disciplines next year and will organize the Rhythmic Gymnastics World Championships in 2019. According to him, it is planned to hold other significant events as well.

Summing up the report, the Vice-president expressed profound gratitude to the country’s President Ilham Aliyev for the attention, care and conditions created for gymnastics development, and, taking an opportunity, congratulated Mr. President on occasion of his birthday. He thanked First Lady Mehriban Aliyeva for the constant support and wise advises which facilitated to solving the problems unavoidable at different stages of development.

Afterwards, there was heard a report of the Federation’s financial director and a group of distinguished gymnasts and coaches were presented memory medals for the results achieved at the 1st European Games, continent’s and World Championships.

At the end of the Assembly, the floor was given to chairman of the Veterans’ Council under gymnastics Federation - Arif Guliyev, member of the Parliament (Milli Majlis) and the Federation’s Executive Committee - Rauf Aliyev, silver medalist of the European Age Group Competitions in Acrobatic Gymnastics - Seymur Jafarov, as well as Head Coach of the Rhythmic Gymnastics National Team - Mariana Vasileva.

The speeches made were remembered by sincere feelings of gratitude addressed to the country’s President Mr. Ilham Aliyev, the Federation’s leadership at the head of its President Mrs Mehriban Aliyeva. Having noted the high organization of the Assembly, A. Guliyev thanked the Federation’s officials for the care and attention paid to each gymnastics veteran. R. Aliyev expressed his gratitude to Mr. Ilham Aliyev for the contemporary sports facilities, which the country’s youth had at their disposal. S. Jafarov stated: “I am very happy to be engaged in this gymnastics discipline enjoying the conditions which are dreamt by every sportsman as well as to feel the care of Mrs Mehriban Aliyeva at my daily trainings.” And, M. Vasileva expressed her gratitude to the First Lady of Azerbaijan for the opportunity given to her to be developed both as a coach and individual, and, especially emphasized, that, thanks to the trust and created conditions within 7 years, rhythmic gymnastics turned into the most favorite sport among girls in the country.

The collective of Azerbaijan Gymnastics Federation extends its gratitude to all the participants of the Assembly and congratulates the whole reelected officials at the head of its President Mrs Mehriban Aliyeva and wishes further successes in the tireless work in development of gymnastics in Azerbaijan.