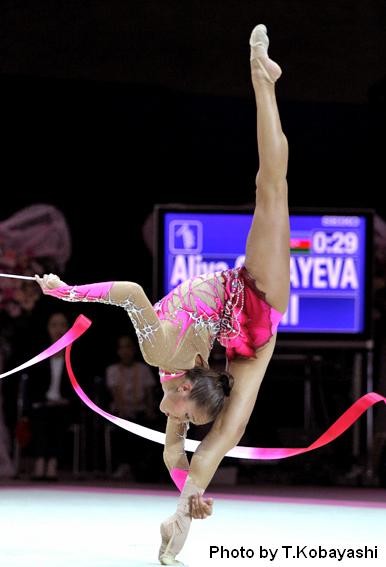 An Azerbaijani 15-year old gymnast Marina Durunda, along with her elder team mates – Aliya Garayeva and Lala Yusifova - was included into the trio collective of “Neftchi” for the Worldwide RG Club Championships which came to an end in the capital of the land of the rising sun.

She did not take any medal winning places but she also had a great credit in winning the highest 5th place by the club as a result. And Durunda herself won the 4th place in the final among juniors under unceasing ovations of the Japanese audience which packed Tokyo Metropolitan Gymnasium. Gymnasts from Belarus, Russia and Ukraine distributed medals among themselves.

According to the head coach of the country’s national team Mariana Vasileva, “loss of a hoop in its final execution prevented her from approaching the podium. But I am sure she can and will demonstrate better performance and we will strive for it. On the other hand, I am very happy for Lala Yusifova (8th place) who succeeded to reach the final among the eight competitors. And only Russia, Belarus and Azerbaijan had 2 representatives in the decisive event,” the coach said.

As to the team’s leader, Garayeva concluded her performances on the 5th place. A Russian Darya Dmitriyeva, the Vice-Champion of the recent Olympiad in London, became the winner of this event.

Next week-end also promises to be saturated with gymnastics competitions. Yusifova and Durunda will participate in the international tournament to be held in Italy.