The European Championships’ Bronze medal belongs to the Azerbaijani acrobats 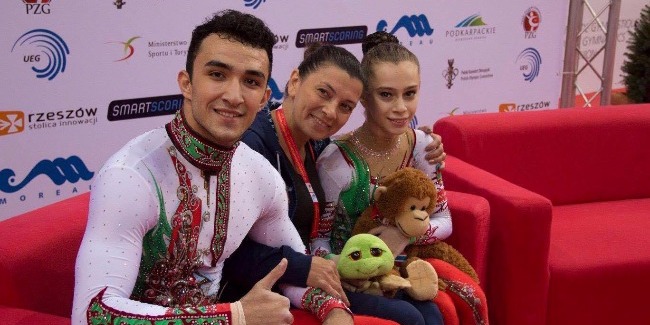 The 28th European Championships in Acrobatics Gymnastics (October 19-22) has started today in Polish City of Rzeszow.

The first day of the competitions can already be considered as successful for the Azerbaijani National Team. Thus, both of our Mixed Pairs - Aghasif Rahimov & Nurjan Jabbarli, as well as Abdullah Al-Mashaykhi & Ruhidil Gurbanli, who set out for Rzeszow to represent our country, managed to qualify for the final in Balance exercises among juniors. However, as only one Mixed Pair from each country is allowed in the final, the important task was carried out by Aghasif and Nurjan. At a decisive stage, justifying the hopes in a worthy manner, our acrobats won the Bronze medal of the Continental Championships with 27.900 points.

Tomorrow, both of our Mixed Pairs will join the contest to qualify for another two finals. The gymnasts to perform Dynamic exercises will define the pairs qualified for the Dynamic Final to be held on the tournament’s last day, as well as All-Around finalists according to the results of 2 exercises (Balance & Dynamic) executed.