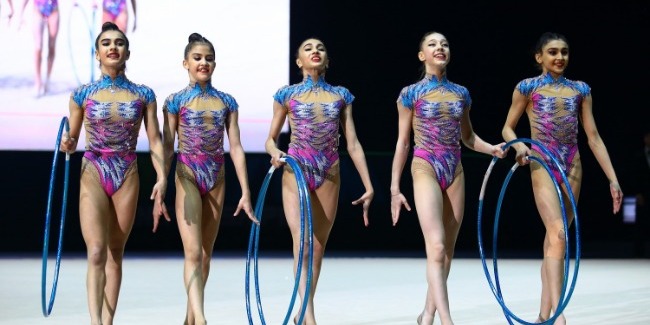 At the Opening Ceremony started with the presentation of the Flags of the participating countries, the President of the European Union of Gymnastics – Farid Gayibov welcomed all the guests by making opening speech. F. Gayibov, wishing good luck to all the gymnasts at the events, announced the Championships open and our favourite singer – Sevda Alakparzada sang our National Anthem.

Afterwards, the show part of the Opening Ceremony followed. The Local Organizing Committee always presenting magnificent shows based on various scenarios to the spectators, this time, depicted 8 sets of medals of the European Championships in the fight of Water Man and Flame Man. According to the scenario, the brothers – Water Man and Flame Man started a game. During the game, Water man won 8 medals from his brother. Being infuriated by his defeat, Flame man expelled him into the world of human beings.

In this world, Water Man meets a team of superheroes. These heroes help him to get back to his world and defeat his brother`s army.

Being grateful for the help, Water man shares his 7 medals among the avengers giving the last one to his brother – Flame Man as a sign of peace and friendship.

Then the Field of Play  was handed over to the junior gymnasts in group exercises.The 20 teams competing for the highest score executed their performances with 5 hoops.

Milana Akbarova, Laman Alimuradova, Madina Asadova, Seljan Hajizada and Farida Safiyarzada representing Azerbaijan in group exercises managed to reach the Final, having received 21.650 points from the judges for their routine with 5 hoops. The next routine of our gymnasts in Qualification of group exercises will be with 5 ribbons on May 18.

Senior individual gymnasts will join the Championships tomorrow as well. In this program, our country will be represented by Zohra Aghamirova and Hudis Veronika.