THE FIRST MEDALS OF THE NEW YEAR 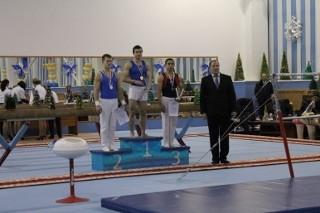 According to the press service of Azerbaijan Gymnastics Federation, Shakir Shikhaliev, who had recently become the country's all-around champion again, won the gold medal of the international tournament for the prizes of the repeated Olympic champion Larisa Latynina in Russia! He demonstrated the better combination and complicated interlacing of connections on floor exercises in comparison with a Ukrainian athlete taken the second place and other six finalists appeared on the floor.

One of them was his team-mate Ughur Khalilbayli, who also had serious claims on prize-winning places. As a result, not less difficult program brought him the "bronze" and the second medal for the Azerbaijani team in the same final.

And, if the participant of the Olympic Games in London, the prize-winner of the international competitions, in short, the skilled gymnast Shikhaliyev, has had a chance to mount the podium before, this award becomes the first swallow for Khalilbayli.

A Ukrainian specialist, the head coach of the national team, Yevgen Moskvin was content with the results of the tournament. "But the performances of other participants - Eldar Safarov and a junior gymnast Kamran Hajiyev on separate apparatus in the all-round are far from an ideal one for the time being. We will strengthen a basis, work on new elements and prepare athletes for tournaments also from the psychological point of view. Major starts will begin in March - these are the World Cup series in Germany and Qatar, a strong event is expected to be in Ukraine. So, we will intensify our preparations with training camp till the European Championship in Bulgaria in May, and, the main thing is to avoid any injuries," the head coach of the artistic gymnastics national team summed up.