The joy of 6 medals and crowd`s National Anthem singing 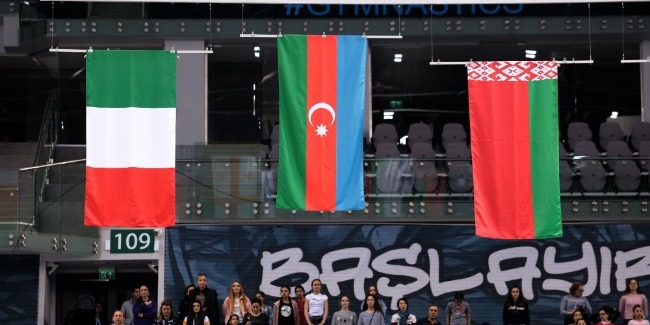 Azerbaijani National Team completed the events successfully, winning 6 medals in the tournament with the participation of 20 countries.

On the first day of the competitions, Azerbaijani junior gymnasts in group exercises brought the first medal to our National Team. Thus, Azerbaijani team consisting of Madina Asadova, Laman Alimuradova, Seljan Hajizada, Milana Akbarova and Farida Safiyarzada became the Silver medallists, having received 41.000 points from the judges in the All-Around.

Today, first, individual gymnasts tested their strength on the floor at Apparatus Finals. Arzu Jalilova mounted the 3rd step of the podium, having received 17.350 points for her routine with a rope.

Her teammate – Narmina Samadova managed to reach 4 Finals. And on the last day of the tournament, she did her best and succeeded to win 2 medals. Thus, our junior gymnast became the Bronze medallist for her exercise with a ball and Silver medallist for her ribbon routine accordingly.

Afterwards, junior gymnasts in group exercises took over the Field of Play. This time, Azerbaijani National team in group exercises demonstrated successful performance and managed to complete the medal set. Having received 21.500 points from the judges, our girls won the Gold medal for their execution of the composition with 5 balls. So, they made everyone happy and our team members sang National Anthem together with all the spectators.

The performance with a ribbon of our junior group was scored 18.350 points. Thus the last medal won by our girls was the Silver medal at this event.

It should be mentioned that in both Individual (Arzu Jalilova) and group exercises (Madina Asadova, Laman Alimuradova, Seljan Hajizada, Milana Akbarova, and Farida Safiyarzada), our gymnasts were awarded with AGF Trophy for their highest execution score.

We congratulate the girls for this successful result and wish them good luck for the upcoming events.