The Silver medal from our gymnast! 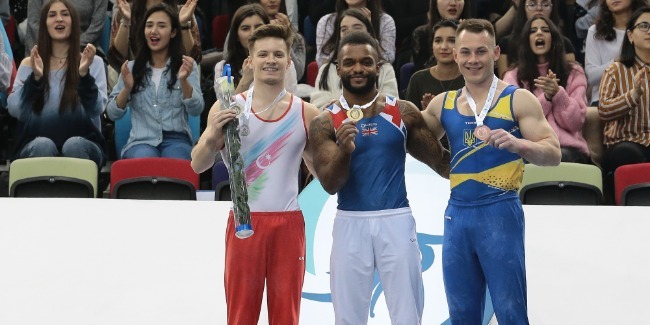 Azerbaijani gymnast  Nikita Simonov has won the Silver medal at the Final of the FIG Artistic Gymnastics World Cup. Our gymnast`s performance on Rings was scored 14.800 points by the judges.

According to Nikita, the spectators’ support helped him to execute his routine succesfully. “I am so excited. The audience supported me very much, I was able to feel this energy. There were some  mistakes in my performance in the Qualification. I worked on them. At the end, my performance in the final was much more better. The fans’ support played a great role in my achievement at the home Arena.

It should be mentioned that 2 more Azerbaijani gymnasts – Murad Agharzayev and Marina Nekrasova performed in the Finals today. Murad received 13.800 points for his routine on Floor and ranked 6th. In the Women`s competition, Marina, having received 13.966 points from the judges on Vault, completed competitions on this apparatus on the 6th position.

It should be noted that tomorrow – on the last day of the events, our gymnast, Marina Nekrasova will compete at one more Final. This time, she will test her strength on Balance Beam.