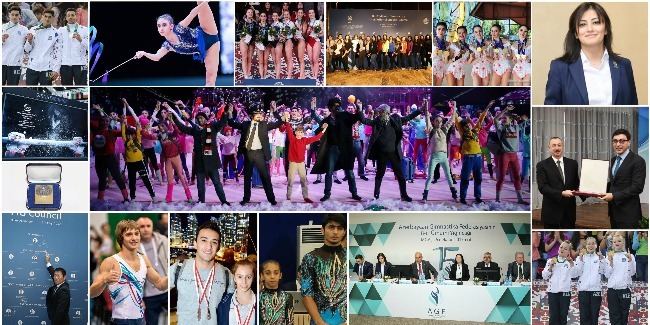 2017, which is coming to a close, has been remembered with a number of remarkable and significant events for Azerbaijan Gymnastics Federation.

At the beginning of the current year, we, for the first time, hosted the FIG Intercontinental Judges’ Course in Rhythmic Gymnastics, followed by the FIG International Judges’ Courses in Rhythmic and Artistic Gymnastics. Azerbaijani representatives, having successfully participated in these courses and in the ones organized in other countries, obtained different international judges’ Brevets. It should be noted that there are judges of the international Brevet in all gymnastics disciplines in our country at present.  Among them, Rza Aliyev is the first judge in history of Azerbaijan Gymnastics who has the highest – the 1st International Judges’ Brevet. Another judge, Kamil Guliyev was the first Azerbaijani judge who assessed the performances at the World Trampoline Gymnastics and Tumbling Championships of this year.

Following the World Cups, the FIG Council Meeting was held in Baku. Within the framework of the Council Meeting, Mrs. Mehriban Aliyeva, the President of Azerbaijan Gymnastics Federation, First Vice-President of the country, was presented with the FIG highest award for the great contribution to the development of gymnastics which is Olympic discipline.

From 96 medals (34 gold, 32 silver and 30 bronze medals) won by our National Teams in gymnastics disciplines in the international tournaments in 2017, the most significant was the Gold medal of our tumbler Mikhail Malkin at the 25th World Age Group Competitions for the first time in our gymnastics history and 3 Bronze medals of our Mixed Pairs (Aghasif Rahimov-Nurjan Jabbarli, Abdulla Al-Mashaykhi-Ruhidil Gurbanli) in acrobatic gymnastics at the European Championships among juniors.

One of the most important events of the year was the fact that Azerbaijan Gymnastics Federation was included into the FIG list of meritorious federations 3rd year in a row. Thus, the high appreciation of our national federation’s activity confirmed our prestige on the international arena once again.

The most important news of the 2017 came exactly in December. Thus, Farid Gayibov, the Secretary General of Azerbaijan Gymnastics Federation, was elected as the President of the European Union of Gymnastics (UEG) at the presidential elections held within the framework of the UEG 27th Congress in Split, Croatia. President Ilham Aliyev and First Vice-President Mehriban Aliyeva congratulated Farid Gayibov and wished him successes in his future work.

Afterwards, F. Gaibov resigned from the position of the AGF Secretary General, taking into account the possible conflict of interests between AGF and UEG, and Nurlana Mammadzada taken up the post of the Deputy Secretary General of the Federation was elected for this position.

As it was every year, the federation once again gathered all gymnastics fans on the eve of the New Year. The spectacular festive show called “Home alone”, taking place with a participation of gymnasts and coaches, presented entertaining moments to all spectators.

In the last week of December, the General Assembly, dedicated to the 15th Anniversary of the federation, was organized.

A number of persons distinguished for their achievements and services in gymnastics field were awarded with the medals, and, thus AGF concluded 2017.

Azerbaijan Gymnastics Federation congratulates you on the International Solidarity Day of Azerbaijanis and New Year!

Thank you for being with us!