THE UKRAINIAN MASS MEDIA ABOUT THE NATIONAL ARENA: IT IS A UNIQUE FACILITY HAVING NO ANALOGUE IN THE WORLD 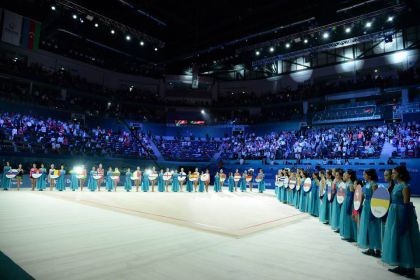 The Anniversary, the 30th Rhythmic Gymnastics European Championships have come to the end in Baku. According to azerisport.com, all visitors were content with the organization of EURO-2014.

The Ukrainian media made a mention of not only the National Gymnastics Arena but they also spoke about the leader of the Azerbaijan National Team, Marina Durunda.

In opinion of many athlethes, coaches and judges, the local authorities did their best - they built a luxurious arena for gymnastics disciplines with all the necessary conditions not only for the European Championships but also for permanent trainings of the national team. This unique facility having no analogue in the world has already been called the pride of Baku… Let us talk about Marina Durunda’s performance. The girl is growing into a star. Marina is well prepared, highly skilled, and, despite her young age, she has her own characteristic feature, relaxedness and charm on the floor. She had obviously wished to make brilliant performances at home event and she managed to do it,” sport.ua reports.