The Vice-President of Azerbaijan Gymnastics Federation: ALIYA GARAYEVA HAS REPRESENTED AZERBAIJAN WITH DIGNITY AND THERE IS A NEW GENERATION RISING WHICH REPLACES HER WITH DIGNITY AS WELL 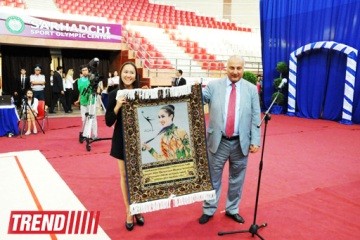 The first place among seniors was implicitly taken by Marina Durunda, the second - by Lala Yusifova (both are the national team’s members), the third - by Yekaterina Prokopenko (Republican Complex Sports School).

Zhala Piriyeva became the first among the juniors, Veronika Omarova became the silver medalist, Zuleykha Ismayilova won the “bronze” (all are the national team’s members).

It is a remarkable, and, at the same time, pleasant fact that geography of participating cities in competitions is constantly expanding which is proven by the second place of Gusar’s representative, Asiman Ordukhanova, in one of the categories.

As to the group teams, "Spartak" won a victory with 5 hoops, and "Sarhadchi" bore the palm with 5 balls.

Making a speech at its completion, the Vice-President of Azerbaijan Gymnastics Federation, Altay Hasanov, especially emphasized that Aliya represented Azerbaijan on the international arena with dignity. He noted that Garayeva had brought successes to Azerbaijani sports having won many awards. “But there is a new generation rising and I think it will replace Garayeva with dignity as well,” he said.

Having wished Aliya successes in her future activity, Altay Hasanov presented her a carpet weaved with her picture.

In her turn, Garayeva expressed her gratitude to the President of Azerbaijan Gymnastics Federation, the First Lady Mrs Mehriban Aliyeva for the trust, and, by old tradition, handed over her leotard to a young athlete Laman Hajizada.

Deputy Minister of Youth and Sports Ismayil Ismayilov presented a title of "Honored master of sports" to Garayeva, as well as classification books of masters of sports to a group of gymnasts.

In addition, during awarding ceremony, "Bakond" company handed over valuable prizes to the Azerbaijani gymnasts and coaches won the recent European Championships’ silver medals in Vienna.

The President of Kyrgyzstan Gymnastics Federation Asad Asadov, who was in Baku, expressed his admiration with the event’s organization, and noted an importance of exchange of experience between two structures.