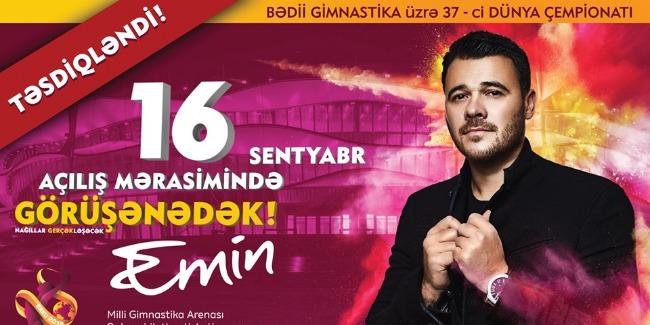 As you know, Azerbaijan Gymnastics Federation is preparing for one of the major gymnastics events of the year. Preparations for the FIG Rhythmic Gymnastics World Championships, to be held at Milli Gimnastika Arenası (National Gymnastics Arena) on September 16-22, are in progress at its full extent during hot summer days.

The organizers have had a special approach to the Opening Ceremony, which became a main part of gymnastics competitions this time as well. Along with the show called "Fairy Tales", which is staged on the basis of Eastern motives, the participation of famous Azerbaijani singers were confirmed in the show part of the Opening Ceremony.

Thus, people`s artist of Azerbaijan and a famous singer not only in our country, but also abroad, Emin Aghalarov, will make the spectators happy with his hit songs at the Opening Ceremony on the first day of the Championships.

Well-known singer and composer of Azerbaijan, honored artist, Tunzala Aghayeva, will sing the National Anthem of Azerbaijan in the form of A cappella.

The exciting moments of the opening ceremony do not finish here. The star ambassador of the World Championships, Azerbaijan’s favorite singer, Miri Yusif will sing a song, which is composed especially for this event.

Here is a brief summary of the Opening Ceremony of the World Championships` show:

“Together with the cheerful Jinn and the robber Alibaba, you will plunge into the world of adventures, wealth and love.

The main characters will set out for beautiful flower fields, wide and deep waters reigned by the sailor- Sindbad, the mountains guarded by Cyclops, and they will witness the love story of Aladdin and Jasmin. But the main and last wish - love will be realized at the beautiful silk palace of the Princess Silkworm Butterfly”.

Amazing adventures await you in the world of Friendship, Love and Fairy Tales that come to life.

Hurry up to Milli Gimnastika Arenası (National Gymnastics Arena) at 19:15 on September 16 to watch this great gymnastics event.

It should be mentioned that you can already purchase your tickets at MGA Ticket Office, Ganjlik Mall shopping center as well as online (https://ticketing.mga.az/). The price of the tickets constitutes 10, 15 and 20 manats.

The information about the events will regularly be updated on our website (www.agf.az).