THE WORLD CUP AND INTERNATIONAL TOURNAMENT IN RHYTHMIC GYMNASTICS IN PESARO 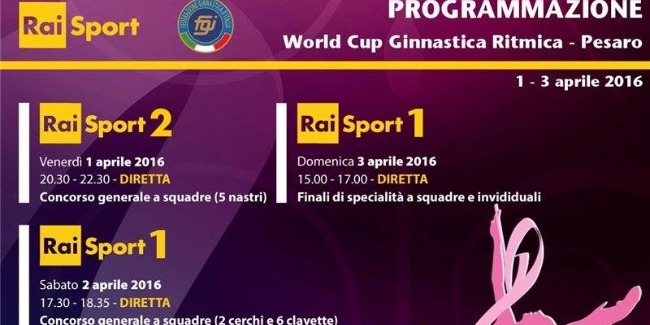 This weekend, the World Cup and international tournament among the juniors in Rhythmic Gymnastics took place in Italian Pesaro city.

In the World Cup, Azerbaijan was represented by team in group exercises, as well as in the individual program.

Having taken the 6th place in the all-around, the group consisting of Siyana Vasileva, Aliaksandra Platonova, Diana Doman, Ayshan Bayramova and Elif Zeynep Celep reached both finals. In the finals, the girls took the 7th and 8th places with three pairs of clubs and two hoops, and five ribbons accordingly.

Marina Durunda performed in the final in the individual program with clubs and ranked 6th.

In the international tournament among the juniors, Azerbaijan was represented by Zohra Aghamirova, Ilaha Mammadova and Veronika Hudis.

Having stopped a step away from a medal in the final exercises with clubs, Zohra Aghamirova showed the best result. According to the results of the qualifications, Ilaha Mammadova gave her place in this apparatus to the Ukrainian gymnast, as per the rules, only one athletes per each country may participate in the finals.

Veronika Hudis also reached the final with a rope and took the 7th place.