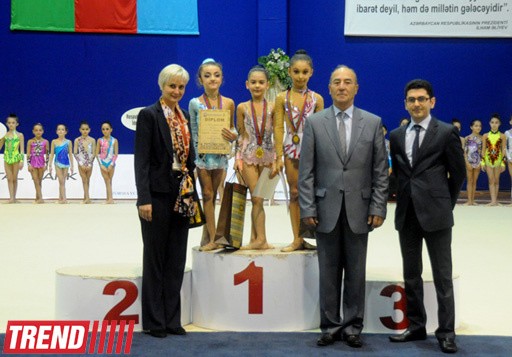 Last weekend, gymnasts from 8 metropolitan sports societies, as well as from Khirdalan, Ganja, Gusar and Sumgayit contended for a set of awards of this year’s final competitions – the 19th Azerbaijan Rhythmic Gymnastics Championship.

If in the younger age categories, it was more or less known who would be among the prize-winners after performances with two apparatus, the gymnasts born in 1997-1999 competed up to the last moment. As a result, Laman Dadashli (“Spartak”) became the winner, the second place – Yekaterina Prokopenko (Republican Complex Sports School), and the third one – Bahar Asgarova (“Neftchi”).

Rugiyya Sattarova (“Spartak”), who left behind Natalya Guliyeva (Republican Complex Sports School) and Ilaha Mammadova from Baku Gymnastics school had no equal In the tournament of competitors born in 2000-2001.

Among the 10-year-old gymnasts, a victory with a one point advantage was celebrated by Vafa Hasanzada (Baku Gymnastics School). The “silver” and the “bronze” were won by Darya Sorokina and Laman Hajiyeva from “Spartak”.

Aydan Aghayeva (“Spartak”) won the first place in the event of sportswomen born in 2003. Her club-mate Laman Huseynova became the second, and the third place was taken by Darya Farshbafshakhriyari from Baku Gymnastics School.

And, finally, Lala Kramarenko (“Spartak”) was announced the best among the youngest competitors – children born in 2004. The prize-winning places were shared between Narmina Samadova (Republican Complex Sports School) and Arzu Jalilova from “Neftchi”.

In the meanwhile, the national team’s leader Aliya Garayeva performed at the third round of the Italian Serie A1 Championship held in Perugia. Her team “Ritmica Piemonte” took the 6th place, and Garayeva herself received 27.25 points with a ball having shown the first result in the collective and the second one among the gymnasts performing with this apparatus. The fourth final round of the Serie A1 will be held in Desio on December 1-2.

Garayeva will arrive in Italy having flown across the Atlantic Ocean. The fact is that there will be held Gala-tour of the London-2012’s best Olympians where Aliya has also received an invitation. Gala performances to be demonstrated in 3 cities: start in Leon, travel to Guadalajara and finish in Mexico City.