THIRTY THREE COUNTRIES REGISTER FOR THE RHTYHMIC GYMNASTICS EUROPEAN CHAMPIONSHIPS TO BE HELD IN BAKU! 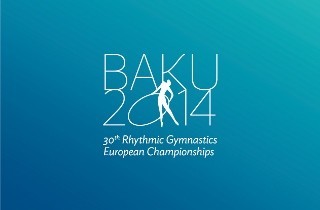 32 countries will perform in the individual tournament among the juniors and 21 teams of the Old World will compete in the events of senior group teams, i.e. each country can be represented with 4 individual junior athletes (with one reserve) and with one senior team in group exercises.

And, finally, according to the results of the European Championships in Vienna-2013, the 20 best gymnasts will define the continent's champion in the Olympic discipline - all around.

258 gymnasts in total will compete for 9 sets of medals in Baku.

As per Euro-2014's schedule, there will be held qualifications of juniors with a hoop and a ball the Championships' first day (June 13), as well as spectacular opening ceremony will take place and the European Champion to be defined according to the results of two performances among the group teams.

The second day (June 14), the juniors will announce the European Champion in a team competition having performed with clubs and a ribbon, and, all-around final to be held among senior gymnasts as well.

The competitions' last day (June 15), celebrated as the National Salvation Day, finals with separate apparatus among juniors and group teams will take place to be followed by the Championships' closing ceremony and Gala with participation of stars of European gymnastics.

The press service also informs that the members of the UEG Technical Committee in Rhythmic Gymnastics will be in Baku on April 3-6. Together with its president, Mrs. Heide Bruneder (Austria), they will hold a drawing of lots for the Championships, meet with the members of the Organizing Committee, take part in the presentation of the Championships' website and promotional trailer, as well as discuss a lot of technical questions concerning the running of the event.

It should be mentioned that the European Championships will take place at the National Gymnastics Arena located not far from "Koroghlu" underground station. This up-to-date facility has already been reckoned among new sports sightseeing of Baku.

Delegations of the participating countries to be accommodated in immediate proximity to the competition venue - prospective Athletes' Village built for the First European Games 2015.

The European Championships to be covered by both local and foreign mass media. As for the media representatives (TV, journalists, photographers, electronic mass media, bloggers and etc.), they can obtain their online accreditation via the UEG website on the following link - fedintgym.com/mediamanager/. Deadline for press entries - is May 28 2014.