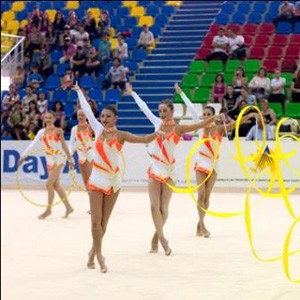 Three awards were taken by Azerbaijani gymnasts at the World Cup series and the “Happy Cup” international juniors’ tournament held in Tashkent. According to the press service of Azerbaijan Gymnastics Federation, the country’s group team consisting of Sabina Abbasova, Aelita Khalafova, Anastasiya Prasolova, Jeyla Guliyeva, Stefani Trayanova and Yevgeniya Zhidkova won their first medal of the recent series in the all-around having taken the 3rd place. And, in a final exercise with 3 ribbons / 2 hoops, the future participants of the World Championships in France (Montpellier, September 19-25) demonstrated even a better performance and became the silver medalists. In a competition of individual gymnasts, Aliya Garayeva reached the three finals having showed her best result in the combination with a ribbon – the 5th place. After two other performances with a ball and clubs, she had been the 8th, and she turned out to be at the 7th place in the all-around. Our second participant Zeynab Javadli did not take part in separate finals having won the 12th place in the qualification among 28 sportswomen. Gulsum Shafizada distinguished herself in the tournament of juniors again. The hoop brought the bronze medal to the 13-year-old gymnast from Baku and the third award to the Azerbaijani national team’s medal box. She became the 5th and 7th with a ball and a ribbon accordingly.