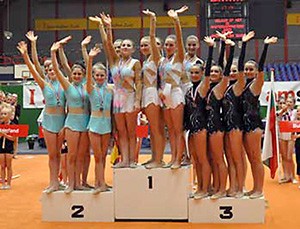 An Azerbaijani group team in rhythmic gymnastics has become an overall winner of the “Amsterdam Masters” international tournament held in the capital of Holland!

According to the press-service of Azerbaijan Gymnastics Federation, the sportswomen, mounting the podium, were especially pleased as our country’s ambassador in Holland, Fuad Iskandarov, was taking part in their awarding ceremony and beaming with happiness not less than the winners themselves. And after the competition, he arranged a solemn dinner in honor of our team.

According to Mariana Vasileva, the national team’s head coach, the Azerbaijani team had a considerable group of supporters in the tournament held in Amsterdam. The diplomat himself and officials of the diplomatic mission, as well as our fellow countrymen living in the Netherlands, were actively supporting the Azerbaijani national team in the course of the whole tournament, thus contributing their mite to the common victory.

“The collective received 24.7 points for their final performance with 3 ribbons / 2 ropes, and their exercise with 5 hoops was estimated even higher by the judges’ corps – 25.65 points,” the head coach noted. As to the all-around, the team received about 50 points in that program.

The group team’s recent successes – are the result of purposeful work carried out by the head coach of the country’s national team, Mariana Vasileva. Our junior group team’s performances during the European Championships held in May, where they won the 2nd place, were still fresh in our memory. And, now, gymnasts of the senior group team, who will take part in the year’s main tournament – the World Championships in Japan in September, just splendidly showed their worth.

The team will be preparing for the world forum in insular Japan on the Balkan Peninsula: training camp in Sofia, and then in Burgas is planned right up till August 13. It should be mentioned that along with the group, a 14-year-old Jala Garatova, who will compete at the next European Championships for the permit to take part in the Youth Olympiad-2010, will also train in Bulgaria.

Senior gymnasts are also taking part in the training camp where they are preparing for the World Championships as well. Aliya Garayeva, Anna Gurbanova, Zeynab Javadli and Samira Mustafayeva will be at the sports base together with Russian gymnasts in Dubrovnik (Croatia) till the middle of August.

And other international competitions in rhythmic gymnastics have come to the end in Russian Kislovodsk, where an Azerbaijani sportswoman won a medal as well. Performing among the gymnasts born in 1997, Ekaterina Prokopenko won the 3rd place. Mansura Baghiyeva became the 10th in the same age group. Sabina Hummatova, participating in the tournament among the gymnasts born in 1999, took the 9th place.