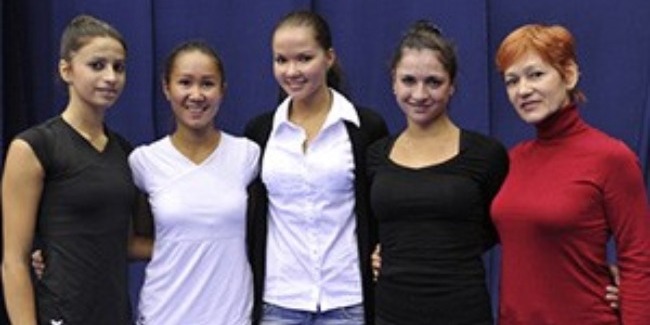 She is deservedly considered as the first number of the Azerbaijani national team. And there are all the prerequisites to it. Alya, as she is called by her friends and mates in the hall, has added a bronze medal to her numerous awards in the all-around at the European Championships in Bremen this spring. She began to engage in gymnastics since she was 5. Now, she has trainings twice a day, six times a week. Garayeva has no “favorite apparatus” – she likes all of them equally. Let’s take a ribbon, for example, the most expressive, the very “gymnastic” apparatus, and very interesting at the same time. “I often become the third with a ribbon, and, having performed with a rope, I became a European Champion in Baku in 2007. And a ball brought the second place to me at the World Championships in Japan last year,” she says. The apotheosis of her performances became her participation in the Olympic Games-2008. In Beijing, she reached the final with confidence where she took the 6th place. The Olympiad in China – i

istory, the Games-2012 in London is to come, and Aliya has a right to expect a great success for herself, for the country from these Games. In principle, this year’s main start – the World Championships in Rhythmic Gymnastics is a zero-time reference from Kremlin Tower to Big Ben. According to a 22-year-old gymnast, “it is necessary to demonstrate a worthy performance in Moscow and to support the reputation of Azerbaijan gymnastics, not to disappoint either the team or the Federation headed by Mrs Mehriban Aliyeva who is doing so much for the development of our sports discipline.”

It turns out that Anna’s next birthday will coincide with a holding of the World Championships in Moscow. And she has no objection to celebrating her 24th birthday on September 24 with another medal either in a team competition or with a separate apparatus of the program. And for now, the highest result at the World Championships was achieved by Gurbanova in Patras-2007 and Mie-2009 when the Azerbaijani team became the bronze medalist. As to the continent, she is a European vice-champion in a team competition (Baku, 2009) and a bronze medalist of the Euro-2009 and Euro-2007 in an exercise with a ball and in a team competition accordingly. But she went down in history much earlier, when she became the first Azerbaijani gymnast who performed at the Olympic Games-2004 in Athens and replaced her team-mate Dinara Gimatova as she had sustained an injury at that time. The priorities have not changed in the course of time. “Certainly, this is the Olympic Games in 2 years, where I would like to demonstrate the bett

performance as I can do it,” the gymnast states. “Naturally, I also remember the World Championships in Moscow and Euro-tournament in Minsk next year, as well as a great number of other competitions where it is necessary to make a creditable showing.” Anna is not afraid of a rivalry. Quite the contrary, she welcomes it. “There has always been a rivalry and this is natural. We, with Aliya Garayeva and Samira Mustafayeva, represent the same country. We are good friends; we constantly communicate with each other, help and support each other. There is no rivalry between us in life. We have a rivalry only is sports,” the repeated Azerbaijan Champion with separate apparatus, says.

She is the youngest among the three Azerbaijani gymnasts-participants of the World Championships.