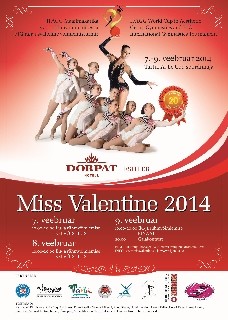 According to the press service of Azerbaijan Gymnastics Federation, the prospective competitor of the European Championships to be held in Baku in June, Marina Durunda, was not disregarded by the judges' fixed attention, the audience's appreciation, warmed from Estonian frost with her hearty performances, as well as by generous organizers. She mounted the podium again and again - only the first places! - and she did it after the final performances with a hoop, clubs and a ribbon. According to the tournament's format, she had a chance to participate only in three finals and won the "gold" in all of them!

The girls within the country's group team, also preparing for Euro-2014 in Baku, demonstrated successful performances like the team leader. Sabina Abbasova, Siyana Vasileva, Aliya Pashayeva, Diana Doman, Aliaksandra Platonova and Aynur Mustafayeva became the best in the all-around, and, then, repeated their success in the finals with 3 balls and 2 ribbons. The team made a mistake only in an exercise with 10 clubs, for which paid with the second place.

The national team's immediate reserve made us happy again. A 14-year-old Zhala Piriyeva tamed the hoop in such a way, that it brought her gold medals twice, and her team-mate of the same age Zuleykha Ismayilova also added the "silver" to the highest awards for clubs and a ribbon in the final with juggling apparatus.

And in this medal bustle, the third participant of the junior team Beyza Demir (born in 1999) managed to content herself only with the second place with the same clubs.

The national team's head coach, Mariana Vasileva, was pleased with the results and the team's performances. "The main thing is that everybody liked a new program, the audience welcomed them very warmly. The girls achieved all goals set for them. And we continue to work, and, I think with even more enthusiasm. I'm also happy with new judges' debut Anastasiya Prasolova and Yevgeniya Zhidkova, who also made a good impression", she said.

In 10 days, these gymnasts of the national team will set out for Budapest to compete in another international tournament. And the gymnasts dreaming of finding themselves within the national team will perform at the qualification tournament of the "Alina Cup-2014" Children's Festival annually held in Russia. A team consisting of 11 gymnasts will demonstrate a cheerful two-minute composition called "Circus" in Nizhnekamsk on February 13.