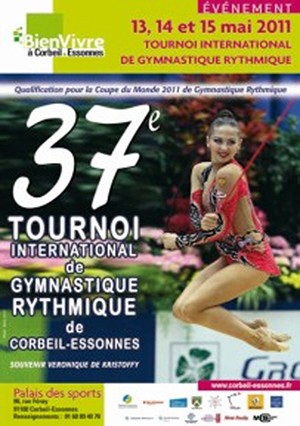 Another, the 7th Rhythmic Gymnastics World Cup series has come to an end in French Corbeil-Essonnes where Azerbaijani sportswomen participated in as well.

According to the press service of Azerbaijan Gymnastics Federation, finals with separate apparatus took place the day before. The national team’s leader Aliya Garayeva competed in two of them and won the silver medals in both finals. Aliya received 28.225 points for an exercise with a hoop and 28.525 points for a composition with a ball.

Only an Olympic champion Yevgeniya Kanayeva from Russia was stronger than Azerbaijani gymnast. After Aliya Garayeva, the floor’s hostess Delphine Ledoux became the third in the first final and a Belarusian Melitina Stanyuta was the third in the second one.

As to the all-around results, Aliya Garayeva took the 9th place, and our another gymnast Samira Mustafayeva became the 24th among 49 competitors. The series held was the last test-tournament on the threshold of the 27th Rhythmic Gymnastics European Championships to be held in Minsk on May 27-29.

74 gymnasts and 23 junior collectives representing 33 countries of the continent will gather at the Multidiscipline Sports Complex “Minsk Arena”. The sportswomen will compete for 7 sets of medals: 5 medals are assigned for individual gymnasts (team competition and 4 finals – a hoop, a ball, clubs, a ribbon) and 2 for juniors (the all-around and final with 5 ropes).