TWO SILVER AND THREE BRONZE MEDALS FROM THE TOURNAMENT IN ISRAEL 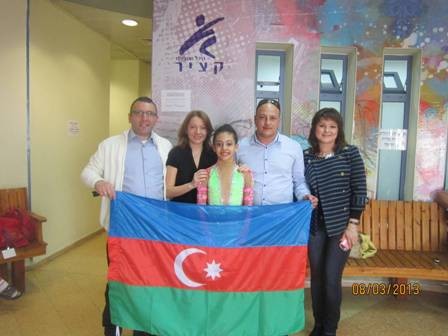 A young Azerbaijani gymnast Zhala Piriyeva continues to win medals in the international tournaments held within the framework of the Grand Prix Series.

According to the press service of Azerbaijan Gymnastics Federation, the 13-year-old gymnast from Baku got 4 awards at the competitions held in Israeli Holon at once!

She mounted the third step of the podium three times (the all-around, clubs and a ribbon), and, at the end of the tournament, she rose a bit higher winning the silver medal with a ball.

Aysha Mustafayeva is also coming back to Baku in a good mood. Bright red round apparatus reciprocated her air-light handling at the competitions of the senior gymnasts and enabled her to compete for prizes and win the second place.

“Lala Yusifova performed very good as well in the tournament of Grand Prix,” the head coach of the Azerbaijan National Team, Mariana Vasileva, says. “Her objective was to find herself in the list of finalists and she accomplished it perfectly! Many specialists have already noted the 17-year-old athlete and her 3 finals from 4 possible ones speak for themselves. Lala`s performance with the same ball, where she finished 4th made me glad and gave me much hope. Yes, she lacked for some 0.0166 points and maybe a bit of self-confidence while performing together with the participants of the Olympic Games. But Yusifova improves with each performance, she finished 6th in the final with clubs, 7th in the all-around and she was the last one in the list of the best 8 competitors with a ribbon. And I can say that everybody liked the new program.”

“Less than three months left before the European Championships, so we will try to hold positions and improve our results at the upcoming "Baltic Cup" international tournament in Poland on March15-17, where young Zuleykha Ismayilova and a junior group will take part in,” the Bulgarian specialist summed up.