Great performance by our gymnasts at the 5th Islamic Solidarity Games 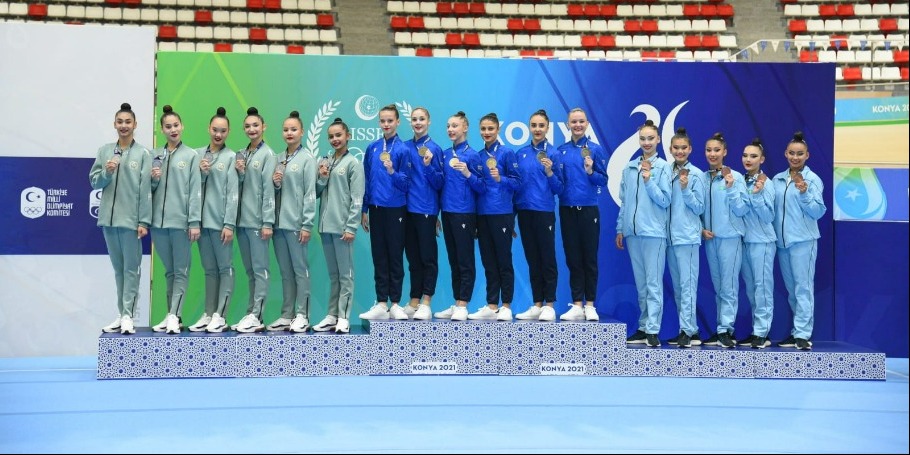 On August 14, the Finals of the Aerobic Gymnastics & Rhythmic Gymnastics competitions were held within the framework of the 5th Islamic Solidarity Games in Konya (Turkey).
Zohra Aghamirova, who tested her strength in the Individual Rhythmic Gymnastics program, won the Gold medal (a Ribbon & Clubs), “Silver” (a Hoop) & “Bronze” (a Ball).
At the Games, our Rhythmic Gymnastics Team in Group exercises consisting of Gullu Aghalarzade, Laman Alimuradova, Kamilla Aliyeva, Zeynab Hummatova, Yelyzaveta Luzan and Darya Sorokina won the Gold medal with 3 Ribbons & 2 Balls, while they became the Silver medalist with 5 Hoops.
Ilona Zeynalova, who competed in the Finals of the Individual program, ranked 4th with Clubs, while she took the 6th place with a Ribbon. Another member of our Team - Alina Gozalova, ranked 4th with a Ball, while she became 7th with a Hoop.
The members of our Rhythmic Gymnastics National Team completed the 5th Islamic Solidarity Games with 8 medals (5 “Gold”, 2 “Silver”, 1 “Bronze”).
Our representatives in Aerobic Gymnastics were also remembered for their successful performances at the Games. Gymnasts - Vladimir Dolmatov, competing in the Individual program, won the Gold medal, while Madina Mustafayeva won the Silver medal. Having left behind all their rivals, Vladimir and Madina became Champions in Mixed Pairs. Madina Mustafayeva, Vladimir Dolmatov & Khoshgadam Guliyeva took the 2nd place within Trio. The members of our Team in this Gymnastics discipline completed the Games with 5 medals (2 “Gold”, 3 “Silver”). In total, the number of medals won by Azerbaijani gymnasts at the 5th Islamic Solidarity Games reached 17 (8 “Gold”, 7 “Silver”, 2 “Bronze”).
On August 17 & 18, within the framework of the games, our Women’s Artistic gymnasts will participate in the competitions.