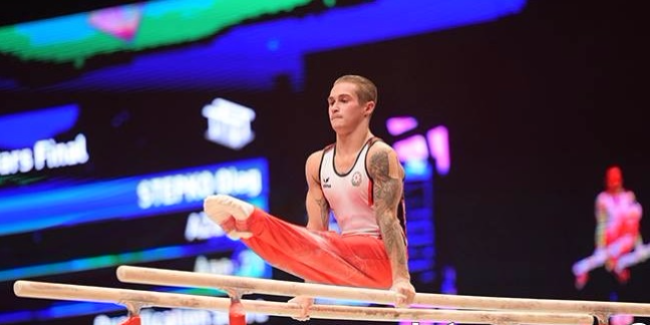 After the 1st European Games in Baku, where an Azerbaijani representative Oleg Stepko became five-time medalist, he has proved at the World Championships in Glasgow that it was not by accident at all!

Oleg Stepko won the first medal of the World Championships in Men’s Artistic Gymnastics in history of independent Azerbaijan. In final exercises on parallel bars, he was awarded with the “bronze”, having shared the podium with Shudi Deng from China.

Oleg was the first to perform in the final. It is not a secret that being the first in the starting list is a psychologically difficult factor for an athlete which not everyone can overcome, as it was in the case of sportsmen in two previous finals. But he controlled himself psychologically as well. Having received 15,966 points from the judges, Oleg justified hopes of those people who sincerely believed in him. His score separated him from the second place won by Oleg Verniaiev just for 0,1 points.

Oleg Stepko, with his performance in the final on his favorite apparatus at the World Championships, once again, proved that he was the strong gymnast who deserved direct ticket to Rio!

It should be mentioned, that, according to the Worlds’ all-around qualification, Oleg had already insured a participation of one athlete from Azerbaijan in April’s Test Event in 2016 also qualifying for the Olympic Games in Rio de Janeiro. This means that for the first time in history of Azerbaijani men’s artistic gymnastics again, we have a chance to compete for the participation in the Olympic Games with two sportsmen.

We congratulate the whole gymnastics community of Azerbaijan with the Worlds’ “bronze”, direct flight to Rio, and, with a right yet to compete for the qualification for the forthcoming 2016 Games.

It should be reminded that this is already the second direct qualification to Rio by the representatives of gymnastics. The first one belongs to the team’s leader in rhythmic gymnastics, Marina Durunda.