WHERE SPORTS AND ART, JOINED TOGETHER, CREATES A PARAGON OF BEAUTY!.. 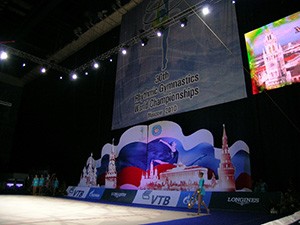 Moscow received the participants of the World Championships in rhythmic gymnastics with an “Indian summer”. According to the metropolitan weather forecasters, such a mild sunny weather with chilly evenings will continue within a week, i.e. in the course of the whole championship.

But the place where it will really be “hot” in autumnal Moscow – is the floor of the grand “Olympiysky” Sports Complex on which gymnasts from 50 countries (more than 150 individuals and 29 group teams) will compete for the 9 sets of awards.

The Azerbaijani national team’s coaches, in their turn, are laconic in their forecasts. According to them, if the girls execute the exercises without any loss and be steady in the course of the whole world marathon, they can hope for success.

Today’s half an hour lasted opening ceremony, absorbed all the gymnastics treasures of the past and present centuries: from the first dances with Aysedora Dunkan’s kerchiefs and legendary Nazmutdinova’s sisters to the bright acrobatic-circus show performed by a vice-champion of the Olympic Games Irina Chashina.

Shots from the Championships in Baku-2005 were also included into the video recordings reflecting geography of the World Championships’ cities-organizers. And Azerbaijani three-color banner waving together with other flags of the participating countries against a background of the International Gymnastics Federation’s emblem enraptured the fans of our team from the Azerbaijani Youth Organization in Russia (AYOR).

Qualifications with a hoop and a rope will continue and finals with separate apparatus will take place at the World Championships tomorrow - September 21.