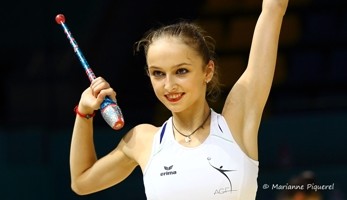 The gymnasts will compete for medals with two apparatus today. At first, our gymnasts Lala Yusifova and Marina Durunda performed in a qualification with clubs. Lala received 16.525 points and Marina got 16.666 point for their exercises with this apparatus having ranked the fourth and the third accordingly in a morning session.

Then, athletes performed with a ribbon. Yusifova received from the judges 16.181 points while Durunda’s point was 16.183. These results have enabled Marina to be ranked the second and Lala the fourth. But there are gymnasts from seven subgroups to perform ahead.

The eight finalists are to be defined according to the results of the preliminary stage and they will compete for the medals. In the meanwhile, Durunda goes the fifth and Yusifova the tenth in the all-around qualification.