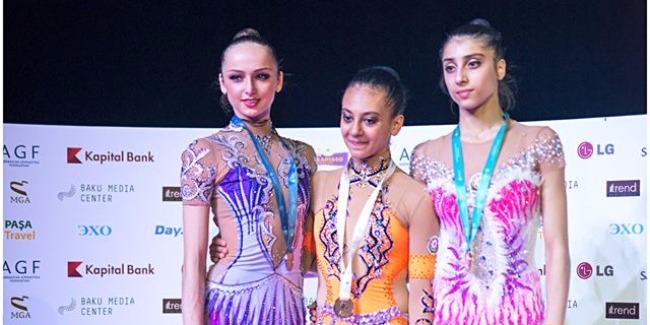 Zhala - repeated winner and medalist of international events - became the country’s Champion in the senior all-around program for the first time having received 73.517 points on May 13. Marina Durunda was awarded with silver medal (72.900), while Gulsum Shafizada won the “bronze” (69.200).

On the first day of the tournament, junior gymnasts defined the winners among themselves in the all-around as well. Zohra Aghamirova mounted the first step of the podium taking a lead over her rivals. Ilaha Mammadova and Darya Farshbafshakhriyari ranked 2nd and 3rd accordingly.

There have already been announced winners in certain age categories at Azerbaijan and Baku Trampoline Gymnastics and Tumbling Championship among Age Categories taking place simultaneously with the events of Azerbaijan Rhythmic Gymnastics Championship. The winners were awarded in four age groups in tumbling competitions held on May 12. Mikhail Malkin (seniors), Farid Mustafayev (juniors), Adil Hajizada (pre-juniors) Mahammadali Jamalov (youngsters) became winners among men, while Zeynab Gasimli (pre-juniors) and Aliya Ismayilova (youngsters) have been awarded among women.

During trampoline gymnastics’ competitions held on May 13, men competed in 3 age groups. Leader of the national team Ilya Grishunin won Azerbaijan Champion's title in the senior gymnasts’ events this year as well. His teammates Oleg Piunov and Dmitriy Fedorovskiy shared the second and third places respectively.

In the final days of the competitions – on May 14, the spectators will have a chance to watch the final performances of junior rhythmic gymnasts with a rope, a hoop, a ball and clubs.  There will also be competitions of trampoline gymnasts among women in senior, pre-junior and minors’ age groups, as well as among men included into children’s one.

Gala with colourful performances of the gymnasts will complete the three-day competitions.

The more detailed results of the events can be found at official website of Azerbaijan Gymnastics Federation (www.agf.az).