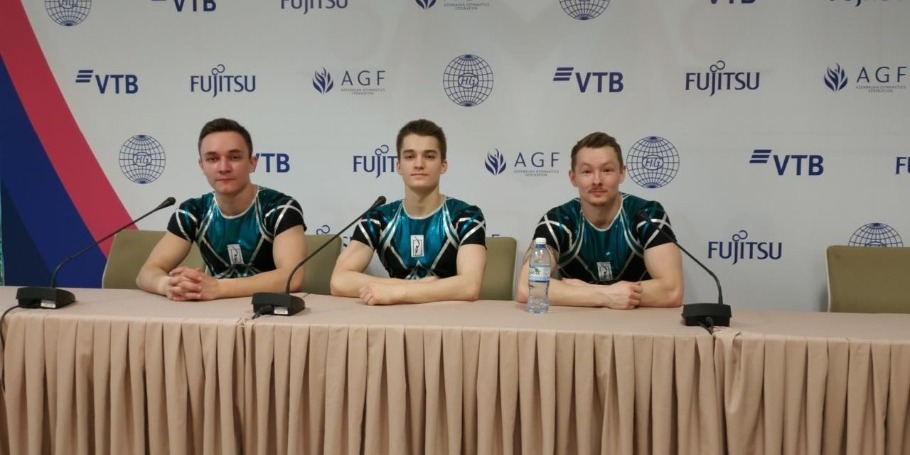 The 16th FIG Aerobic Gymnastics World Championships is being held at the highest level at the National Gymnastics Arena in Baku on May 27, Russian athletes Alexei Germanov, Anton Kolobov and Petr Perminov, performing in the trio, told.

"The World Championships has been organized at the highest level,” Germanov said. “We have been participating in international competitions all over the world for more than 10 years. We have come to Baku for the second time.”

“We see that Azerbaijan is fully preparing for the competitions,” the gymnast added. “All conditions have been created for athletes and team representatives.”

“The organizational process is excellent,” Germanov said. “We like everything, the city is beautiful, the weather is good, people are good-natured."

“In connection with the sanctions of the World Anti-Doping Agency (WADA), all Russian athletes are forced to compete without the flag and anthem of their country at the Olympic Games and World Championships until December 16, 2022,” Germanov added.

“The athletes are performing under the flag of the Russian Gymnastics Federation in Baku,” the gymnast said. “According to the trio members, this situation did not affect their morale at the World Championships in Baku.”

“We knew this,” Germanov said. “It didn't knock us down in any way, we are ready for this competition, ready to show our best performance.”

While speaking about the program in qualification, the gymnasts stressed that they made minor mistakes.

“There were some shortcomings, but in general we did what we wanted,” Kolobov said. “We performed smoothly, without any gross mistakes. Now we have a new composition in the top three, but in the final, of course, we will do our best.”

While speaking about the competitions without spectators, Perminov emphasized that the delegations of the countries participating in the World Championships support each other.