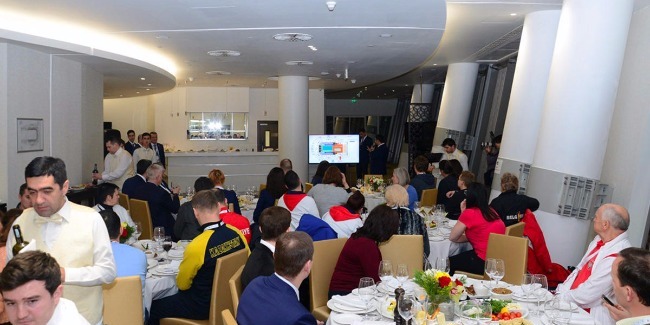 Baku has hosted a meeting of heads and representatives of the delegations who are in Azerbaijan’s capital for the upcoming FIG World Cup in Trampoline Gymnastics and Tumbling.

Secretary General of Azerbaijan Gymnastics Federation Farid Gayibov welcomed the delegates and wished them good luck at the competitions.

He noted that this is the first FIG World Cup event in Baku which includes tumbling, adding that double mini trampoline competitions will be held in Azerbaijan during the 2018 Trampoline Gymnastics European Championships.

Gayibov spoke about the special design of the Baku National Gymnastics Arena, which will attract more viewers to the trampoline competitions.

Nikolai Makarov, first vice-president of the FIG Trampoline Technical Committee, stressed the high level of preparation for the competitions and the readiness of the National Gymnastics Arena in Baku, adding that the arena is unique.

Makarov thanked foreign participants who have arrived in Baku for the FIG World Cup in Trampoline Gymnastics and Tumbling.

Makarov added that in 2019, Baku will host the Rhythmic Gymnastics World Championships, which will give licenses for the 2020 Tokyo Olympics.