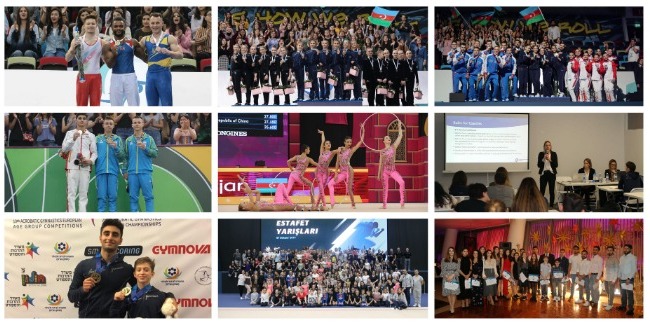 One more successful year for Azerbaijan Gymnastics Federation (AGF) is left behind.

2019 was saturated both with the events held in our country and the successes of our gymnasts. 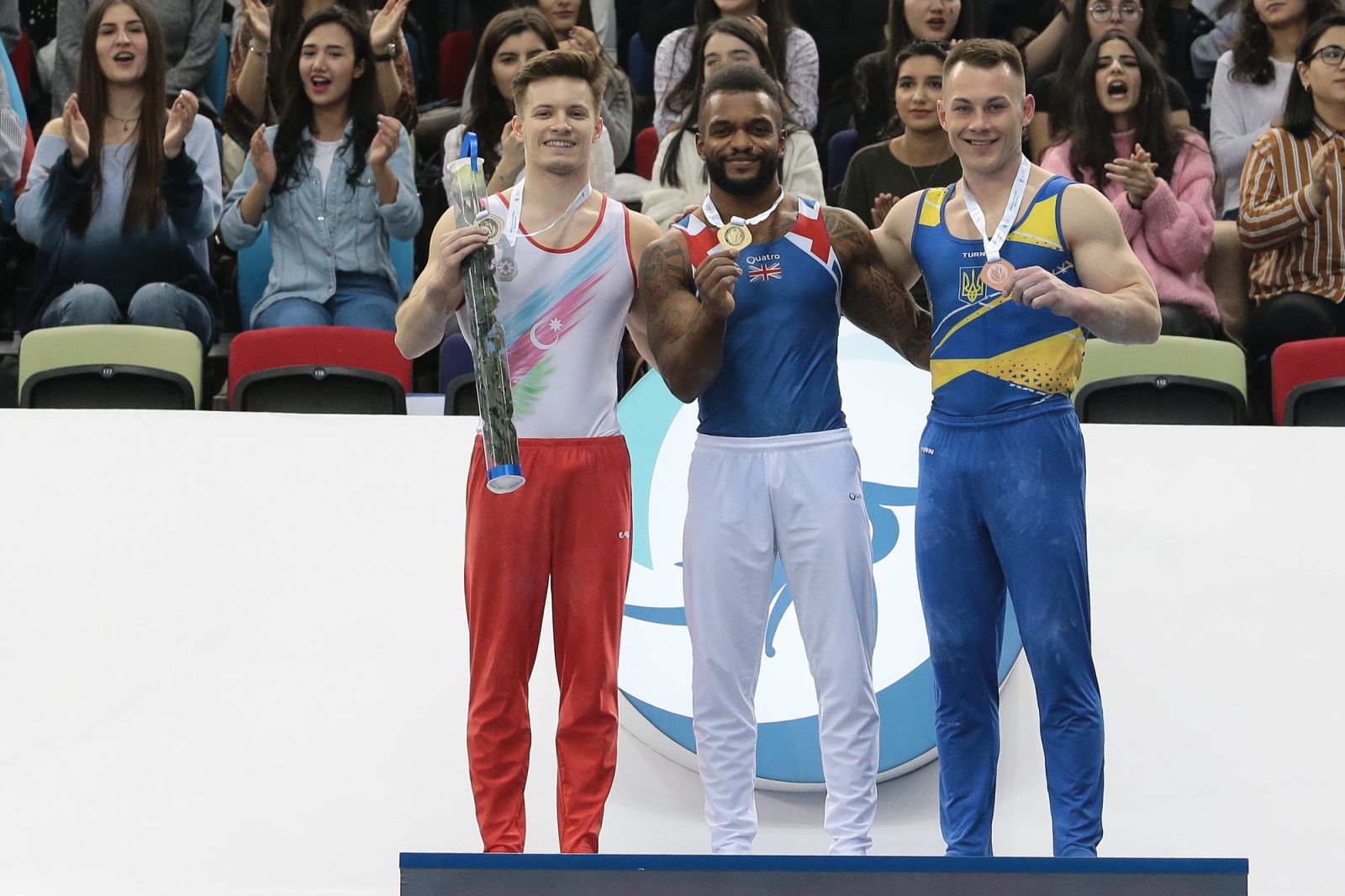 Moreover, there was held the 2nd “AGF Junior Trophy” Rhythmic Gymnastics international tournament in April. On the last day of the competition, our team in group exercises won the Gold medal and the gymnasts sang the National Anthem together with the spectators. The video depicting that very moment was the most viewed and shared video on AGF's social media accounts. 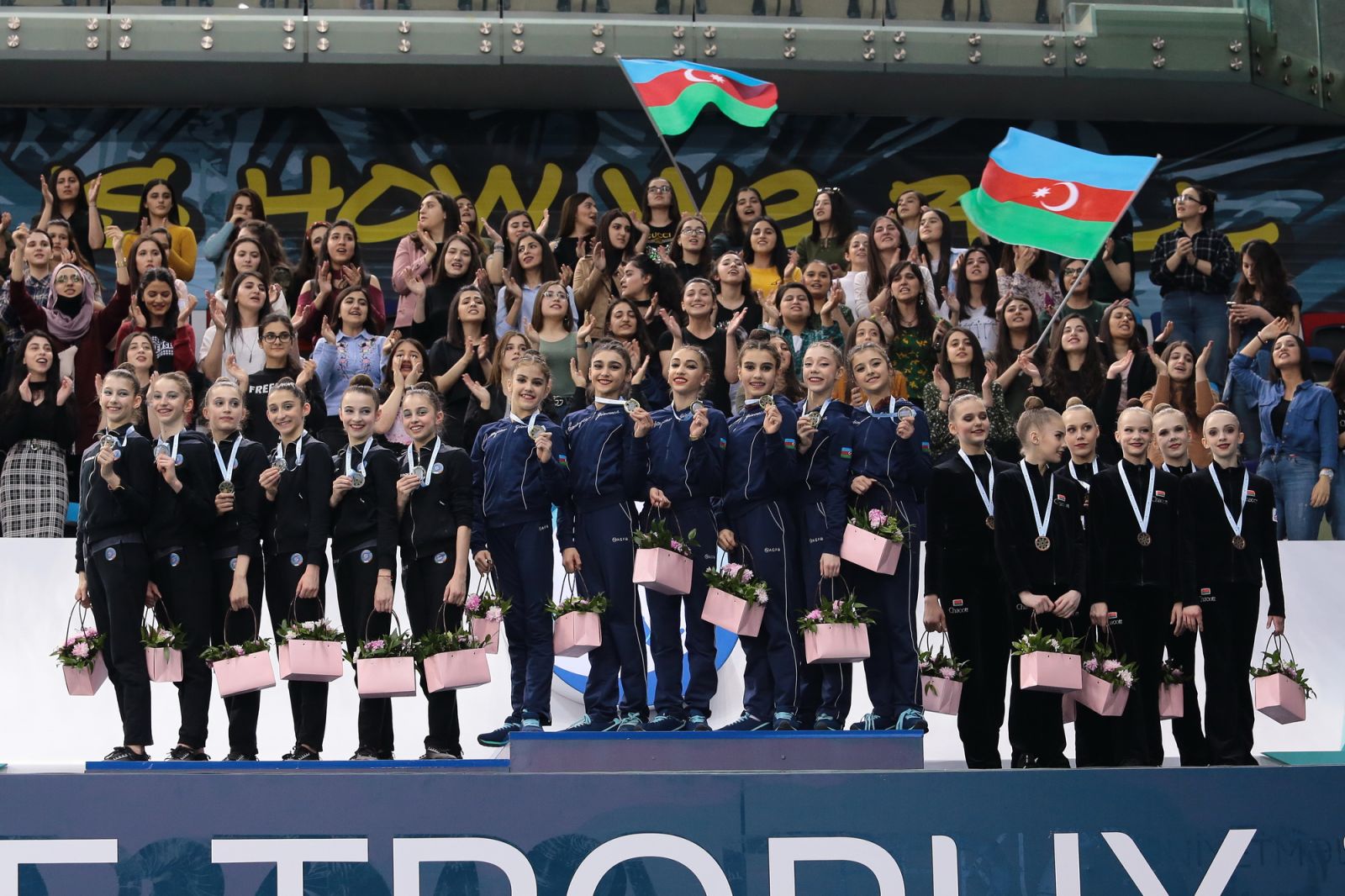 The next event held at Milli Gimnastika Arenasi was the competitions in Men`s and Women`s Artistic Gymnastics within the framework of the European Youth Olympic Festival (EYOF). 170 athletes from 38 countries tested their strength at the Olympic Festival of junior gymnasts.

Finally, the most major gymnastics event held in our country this year – the Rhythmic Gymnastics World Championships qualifying for the Tokyo-2020 Olympic Games took place in Azerbaijan in September. At this Championships held in our country for the 2nd time, the Azerbaijani gymnasts in group exercises achieved the long-expected result – they qualified for the Tokyo 2020 Olympic Games. Zohra Aghamirova also succeeded to qualify for the Games. 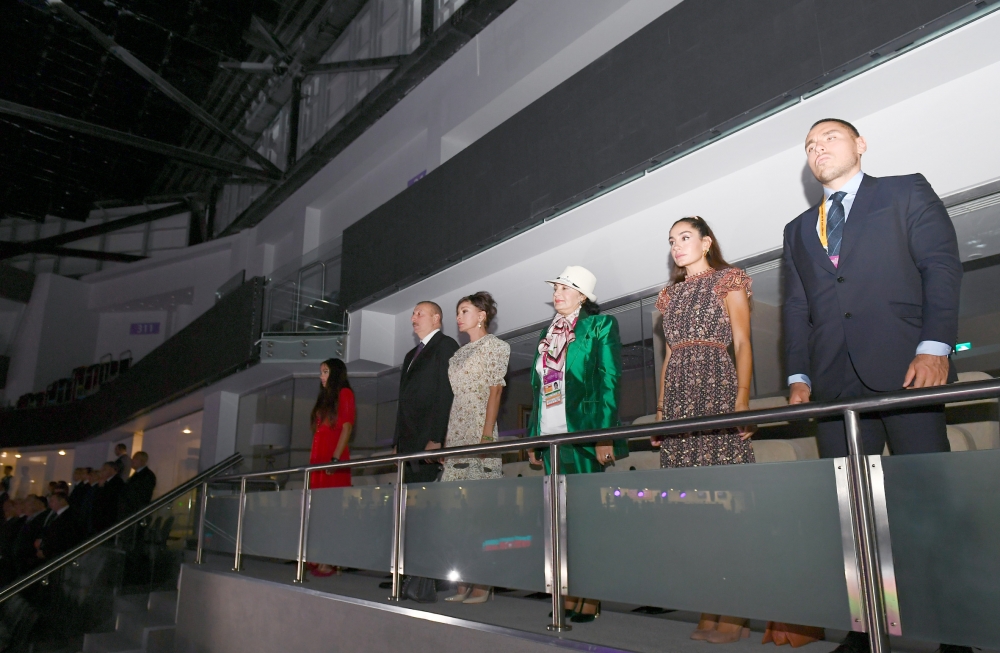 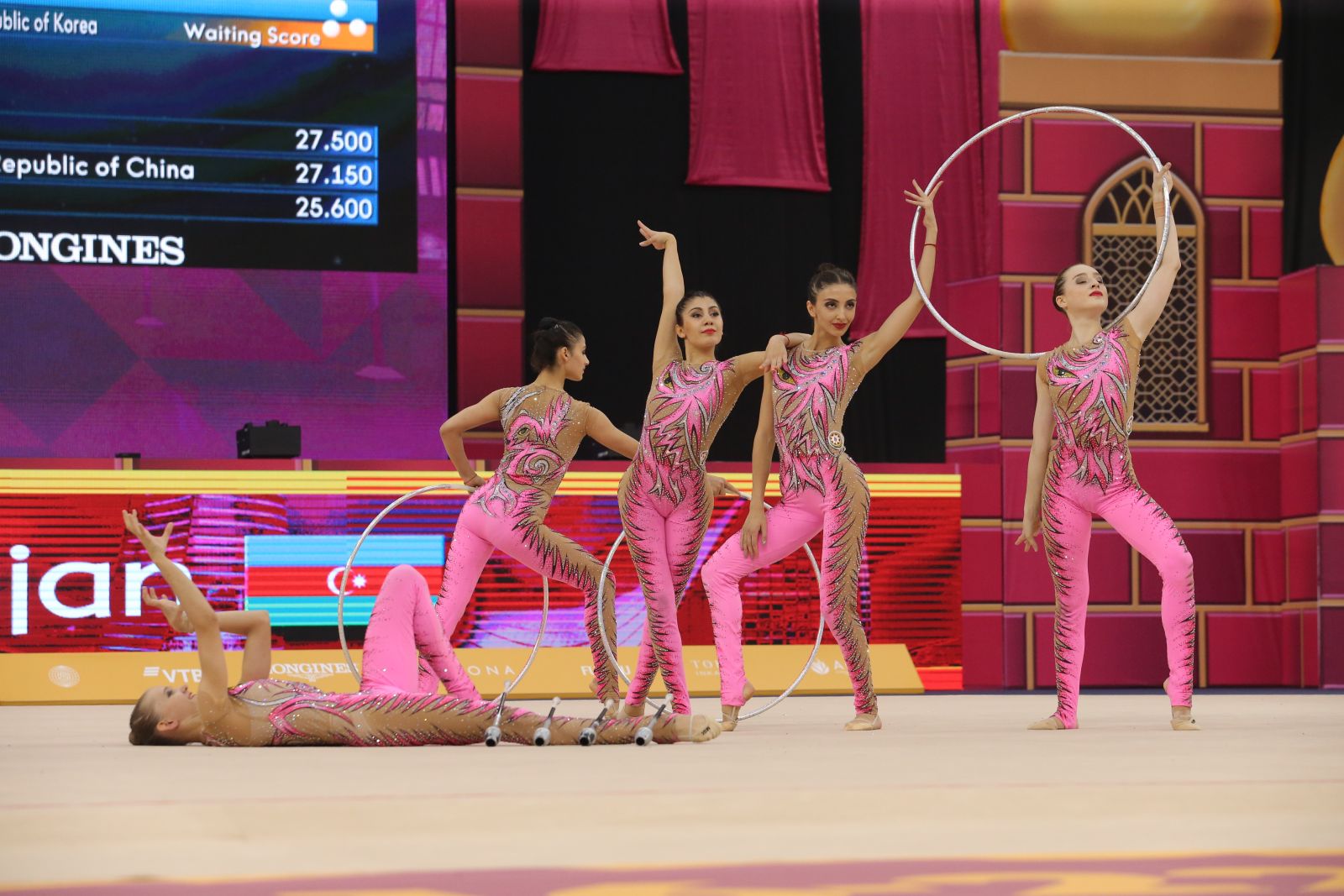 Speaking of the successes of our athletes, it is important to mention the results of our junior and pre-junior gymnasts. This year was remarkable for them with the successes they achieved both at the events held in Azerbaijan and abroad.

Arzu Jalilova, who will join the competitions of senior gymnasts from the New Year, won two medals – the Silver (ball) and Bronze medals (Rope) at the Junior World Championships in Rhythmic Gymnastics held in Russia for the first time in 2019. Our Artistic gymnast, Samad Mammadli was honoured with the Silver medal on Pommel Horse at the Artistic Gymnastics competitions held within the framework of the European Youth Olympic Festival. Our acrobats returned with a complete medal set from the Acrobatic Gymnastics European Championships held in the City of Holon, Israel. The men’s pair consisting of Murad Rafiyev & Daniel Abbasov were awarded with the Bronze medal for their Balance exercise, the “Silver” and the “Gold” in the All- Around and for the Dynamic exercises accordingly. The joyful medal news of the Azerbaijani pre-junior gymnasts came from the Trampoline Gymnastics World Age Group competitions held in Japan. At the events, Magsud Mahsudov won the Gold medal in the Individual program, and, together with Huseyn Abbasov, they were awarded with the “Silver” medals in the Synchronized program. Having left behind all his rivals, Aleksey Karatashov, became the winner in his age category at Tumbling events.

The achievements of our junior and pre-junior gymnasts show that the development of gymnastics disciplines in Azerbaijan goes in correct and planned way, and, there is a growing young generation, who will represent our country at the European and World Championships, even at the Olympic Games with dignity. These athletes, who were remembered for their performances this year, will perform at the World and European Championships in the following years to come. 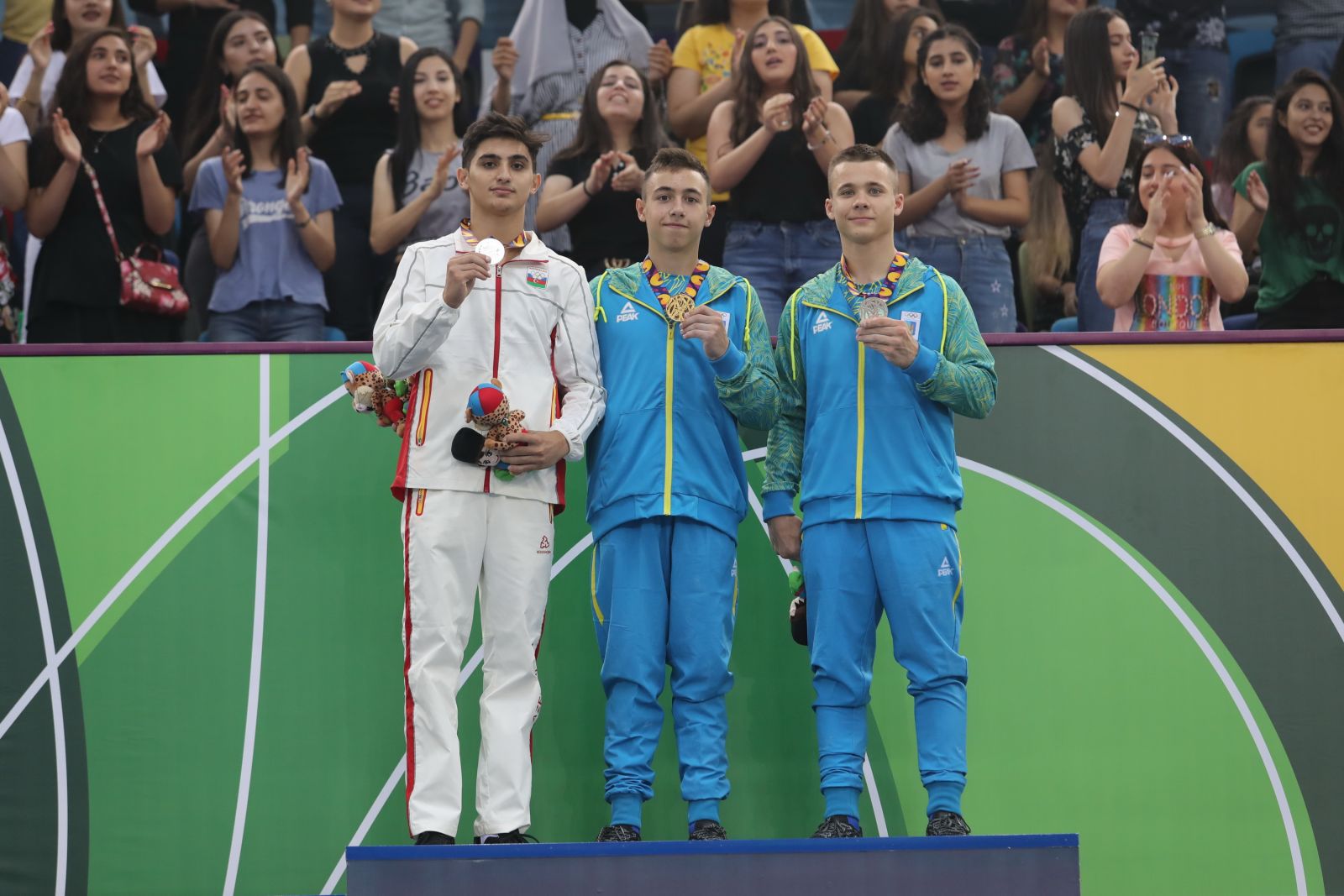 In 2019, the gymnasts, competing in the senior age category, also won medals at the competitions held both in our country and abroad. Along with the medals won at the World Cups and at a number of international events, the 2 Silver medals of Zohra Aghamirova and the “Gold” of Marina Nekrasova from the Summer Universiade (Italy), 2 Silver and 1 Bronze medals of our acrobats Abdulla Al-Mashaykhi & Ruhidil Gurbanli (Mixed Pair) from the 2nd European Games (Belarus) and their 2 Bronze medals from the European Championships (Israel) should be mentioned. 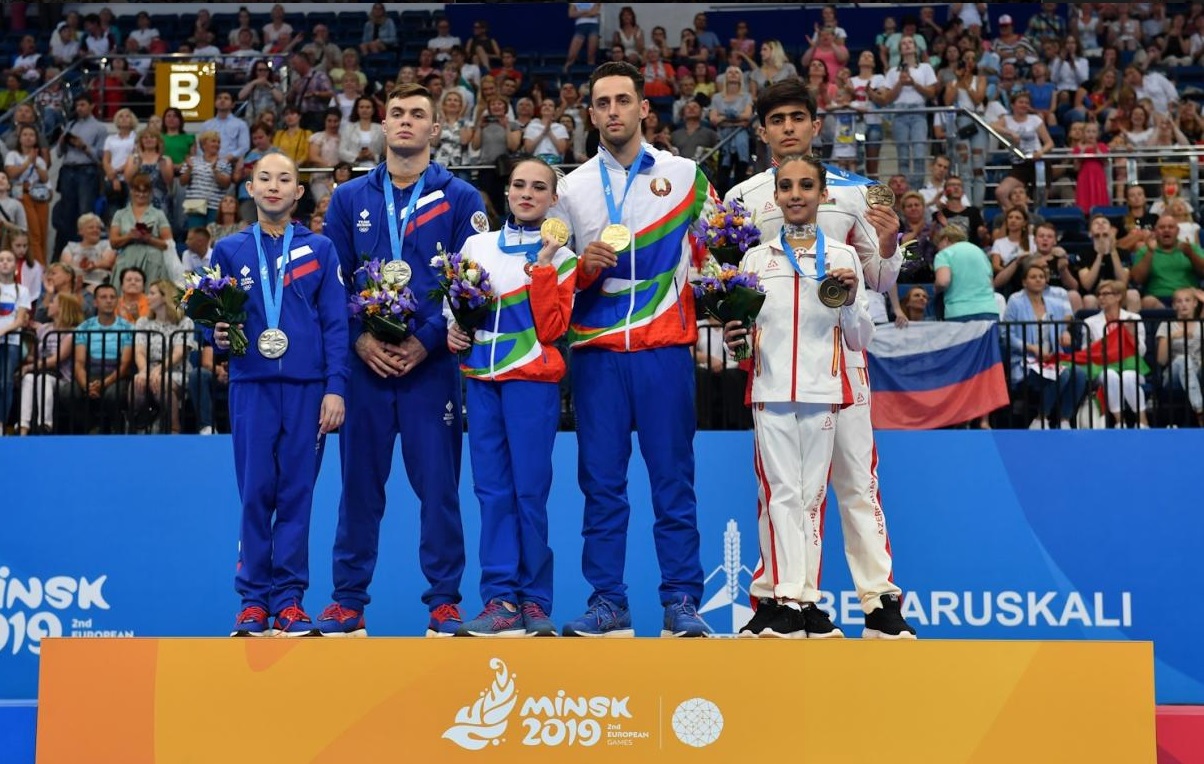 Having demonstrated a perfect performance in “Aero dance” program, our representatives in Aerobic Gymnastics became the European Champions at the Continental Championships held in Baku for the first time. 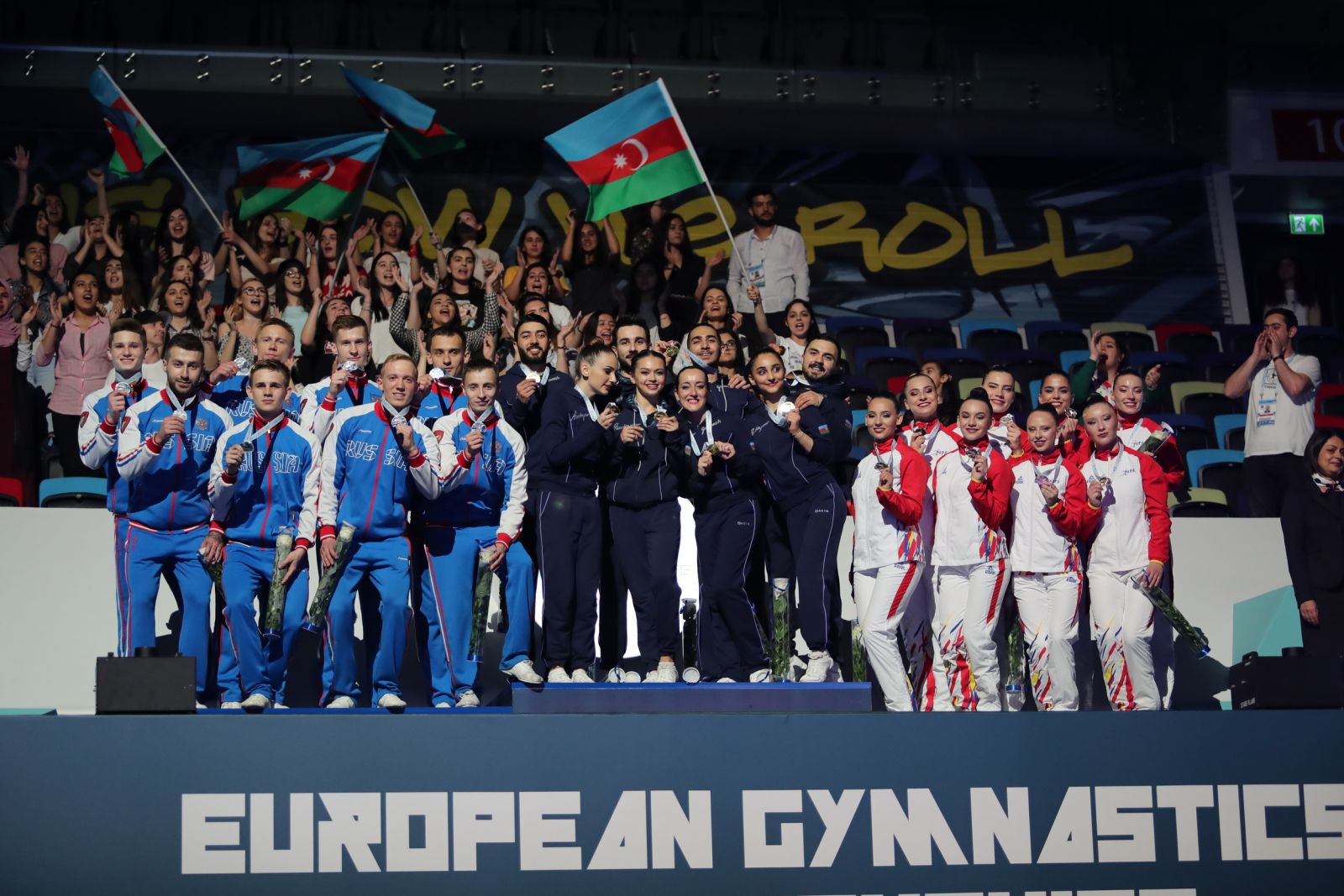 Along with the successes of the gymnasts, the activities of our coaches and judges should also be mentioned. Thus, they are often invited to different events by the International Gymnastics Federation (FIG) as well as by a number of organizations operating in this field, and their activities are always highly valued. This year, Mariana Vasileva – Head Coach of the Azerbaijani Rhythmic Gymnastics National Team was awarded with the “Honorary Coach” Diploma by the FIG. Rza Aliyev – holder of the international judging Brevet in Men`s and Women`s Artistic Gymnastics – was awarded with the “Gold Diploma” in recognition of his “long term distinguished service” by the FIG.

This year, the Azerbaijani judges were invited to assess the performances of the European Games (Minsk), the European and World Championships in gymnastics disciplines by the European Union of Gymnastics (UEG) and the FIG accordingly.

Within 2019, AGF also expanded its scope of activity. The Federation took some steps for the purpose of development of Parkour which was newly included into the list of gymnastics disciplines recognized by the FIG. The Azerbaijani representatives in this discipline participated in Parkour World Cup for the first time. Having also joined the international judges’ courses in Parkour, our representative obtained the international judging Brevet by successfully passing the exams. 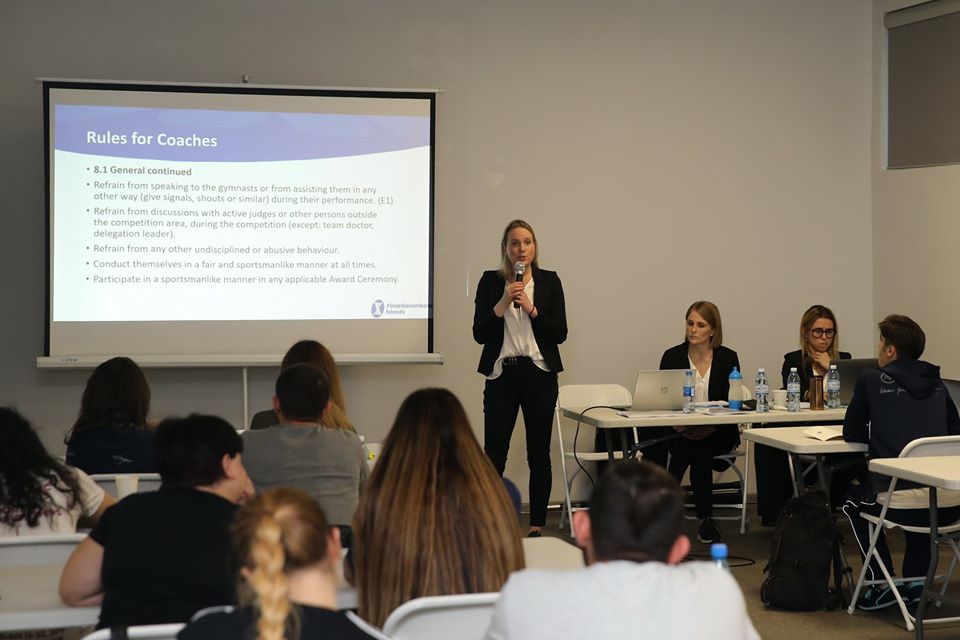 It is not occasional that according to 2018 results, the AGF’s activity was highly evaluated by the FIG, and AGF was ranked 1st in the list of "Meritorious Federations", as it was in 2017.

Gymnastics events organized in Azerbaijan have also been beneficial to the economy of the country. Thus, guests arrived in our country to participate in these events, reserved rooms for over 11,500 nights at various hotels of our capital. Taking into account that the majority of these rooms were twin ones, as well as the finances which these individuals spent on shopping, meals, souvenirs and gifts, visiting museums and sights of the city, we can assume of some contribution also to the country's economy.

Along with Baku, the measures directed to the development of gymnastics disciplines in regions are continued. This year, there were opened gymnastics sections in 4 regions - Lankaran and Gakh (Rhythmic Gymnastics), Masalli and Shirvan (Men` Artistic Gymnastics). Local competitions are organized not only in the capital city of Baku, but also in other cities. Thus, this year, joint competitions in Men's and Women's Artistic Gymnastics, Acrobatic and Aerobic gymnastics were held in Sumgayit in November.

The main purpose of all these events is the massive involvement of the population in a healthy lifestyle, increase of a number of people who understand gymnastics, as well as growth of interest of parents along with their children and people belonging to all age categories in general.

The 1st AGF relay races with a participation of the National Team members in gymnastics disciplines, their parents and coaches, can be referred to the events of this kind. Both children, parents and coaches spent amusing time by participating in the interesting games which was held for the purpose of development of a collective spirit and improvement of the physical fitness of the participants. 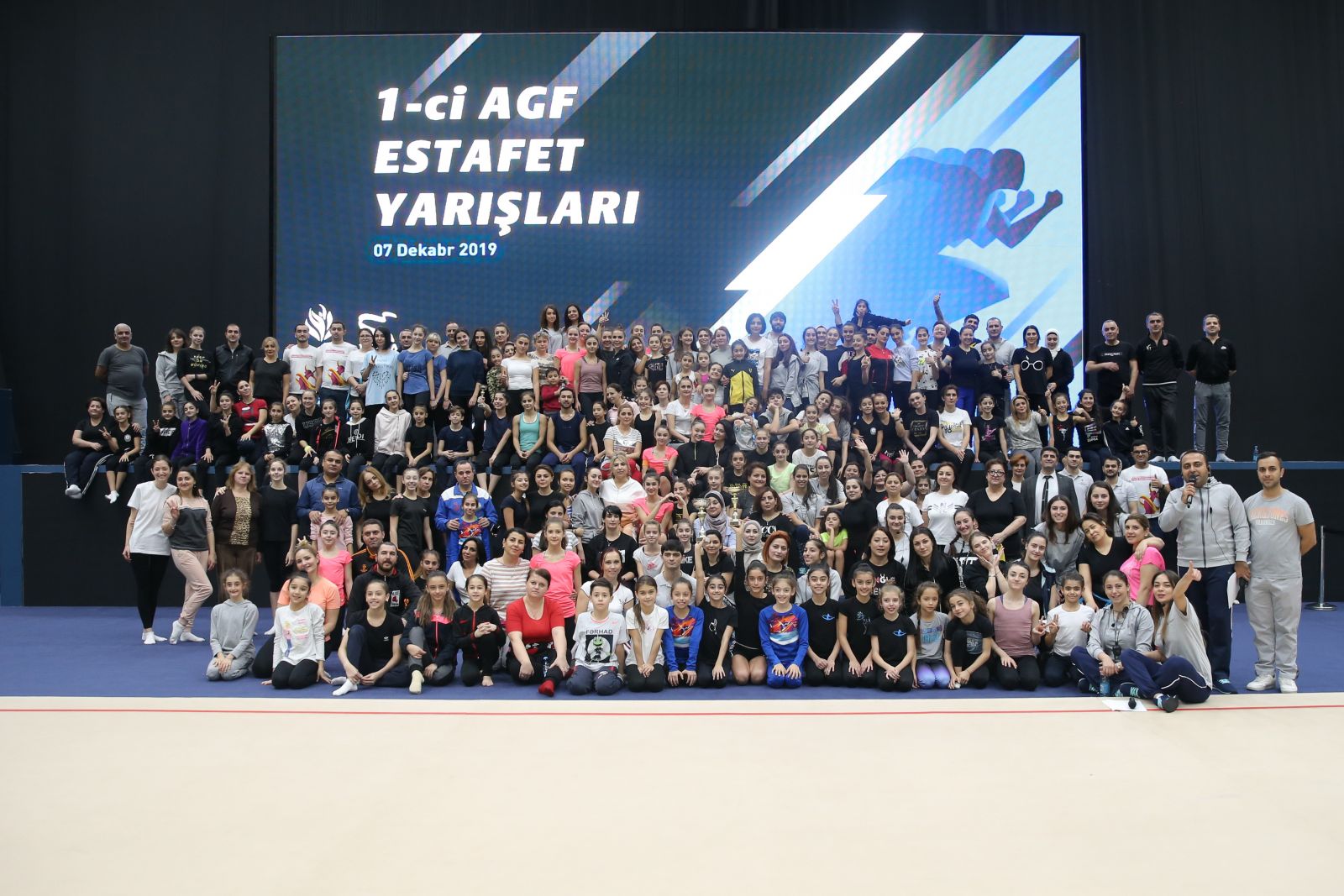 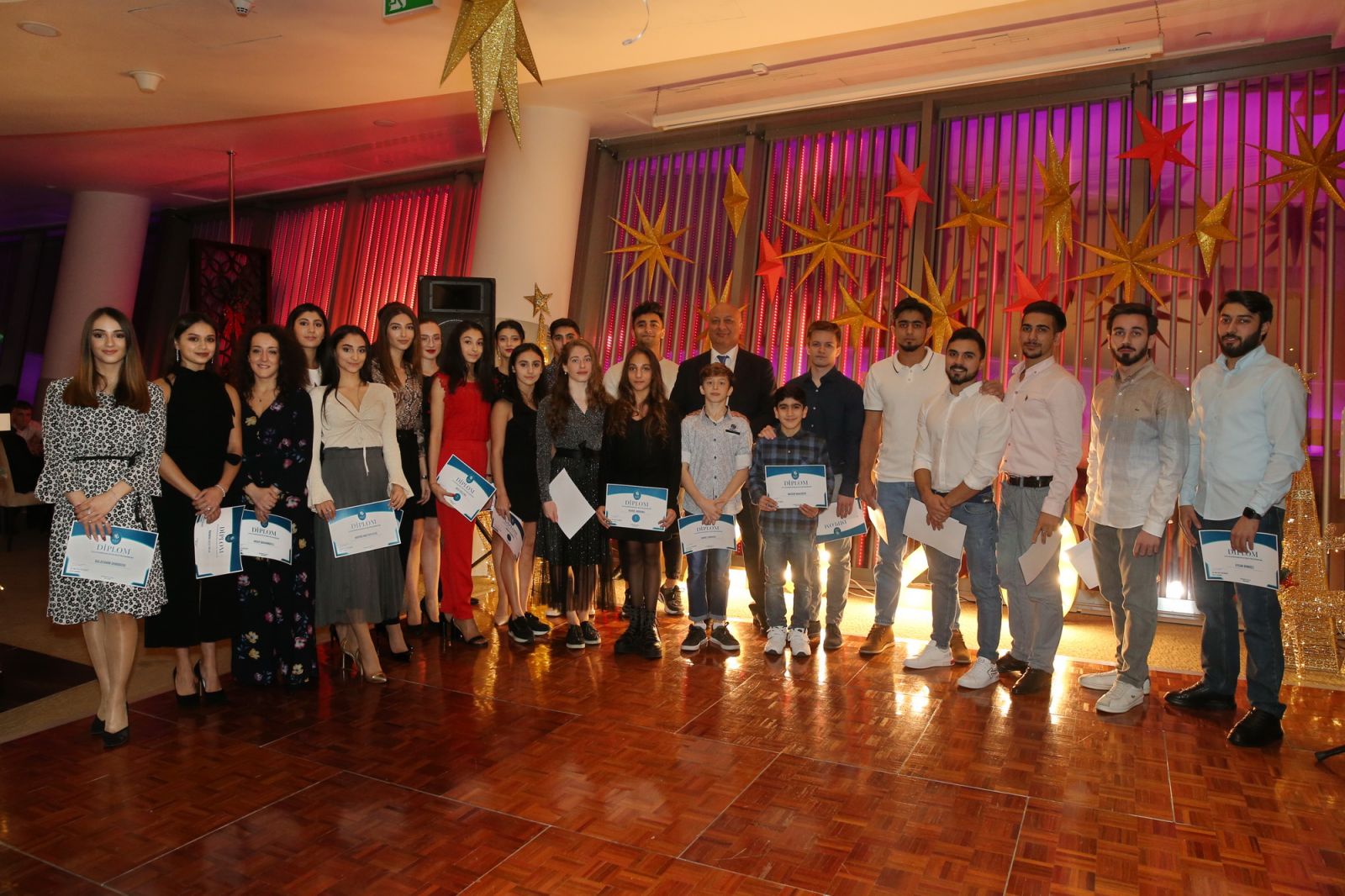 Finally, 2019 will be completed with a traditional New Year show. For many years, the actors of this show have been members of the National Teams in gymnastics disciplines, coaches and choreographers. Light, sound and graphic effects, as well as special costumes will be used at the show which attracts a great interest every year. The show, which everyone looks forward to seeing, is called "The Adventures of Tarik Gymmaster and his friends."

The Federation's wide spectrum of activities does not end here. In order to further popularize and promote this sport in our country, videos are filmed, social projects are implemented, and the cooperation with people with physical disabilities proceeded with. AGF will also continue its work in this direction next year.

So, be with us next year as well!