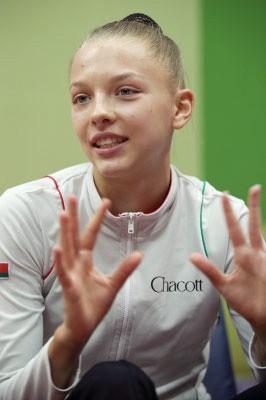 Last night’s Rope and Hoop competitions of the 2009 World Games in Kaohsiung (TPE) fired up the crowd in the arena with excellent performances given by the world’s elite rhythmic gymnasts. The public can’t wait to see them returning to the floor tonight, this time on Ball and Ribbon.

Awe-inspiring athletes, these women have come from all over to compete here in Kaohsiung. Each has her own story, her own career. A closer look!

Melitina seems to be the rising star of Belarusian Rhythmic Gymnastics! The 16 year old is incredibly talented and got off to a great start to her international senior career this year. She finished ninth in the Individual All-around at the European Championships in Baku and medalled not less than ten times at this year’s World Cups, Silver on Ribbon in Maribor being her best result so far. Having qualified for both Finals last night in Kaohsiung, Staniouta barely missed out on a medal, finishing 4th on both apparatus. But there is more to come tonight! As the current number one hopeful in Belarus, Staniouta is pleased to have qualified for her first World Championships, set for September in Mie. Last year, events such as these were only a dream, she admits with a smile.

Liubov Charkashyna is already well-known on the Rhythmic Gymnastics stage, having debuted as a senior in 2005. Since then the talented Belarusian has participated in four European and two World Championships, as well as the Beijing Olympic Games where she ranked 15th in the Individual All-around. However, these are her first World Games and she relishes the atmosphere of this interesting multi-sport event. Charkashyna qualified in the Hoop Final last night in sixth place.

After the World Games draw to a close, the two Belarusians will head to the next World Cup in Kiev, followed by Minsk, where they will perform before their home crowd alongside their compatriot Svetlana Rudalova.

With Anna Gurbanova and Aliya Garayeva, Azerbaijan is represented by two Olympians here in Kaohsiung. Gurbanova, who became a member of the national team in 2004, participated in the World Championships in 2005 and 2007 and has already tasted World Games excitement in Duisburg (GER). Last night she qualified for the Rope Final, where she ranked sixth.

The peak of 21 year old Garayava’s career came when she qualified for the Beijing Olympic Final. At the 28th World Championships in Patras in 2007, her first year on the international stage, she came in just shy of a medal rank, placing 4th on Rope and Hoop.

Looking at an extremely strong field in Kaohsiung, the two Azerbaijani gymnasts are reluctant to talk about medals. They recognise the importance of the Wold Games and hope to do their best in an attempt to qualify for tonight’s Finals.