DURUNDA IS THE SECOND IN ITALY... 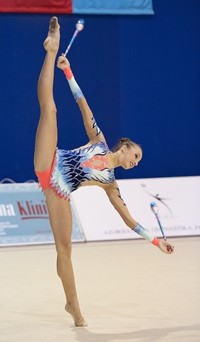 According to the press service of Azerbaijan Gymnastics Federation, A.S.D. Armonia d'Abruzzo-Chieti Club won silver medals in many respects due to her performance. Thus, Durunda received 17.15 points for an exercise with clubs, which became the highest result among her teammates and other competitors performing with this apparatus. In total, A.S.D. Armonia d'Abruzzo received 296.1 scores and having already 72 points on its credit side was still retaining the first place in the ranking list. Before the final round to take place on the last day of autumn, Marina's club takes the 3-points-lead over "Ginnastica" club from San-Giorgio, led by a world champion from Ukraine Ganna Rizatdinova.