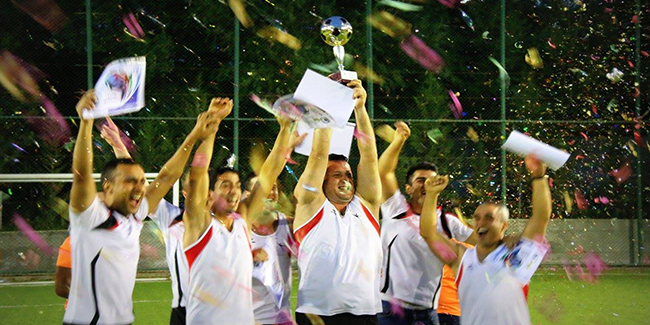 “Məşqçilər” (coaches), whose ​​physical preparation did not yield to their gymnasts and even amazed with endurance, won 4 matches. Moreover, the joy of the approaching celebration of being owner of the Cup and plunging into confetti, they had been having one tour before the end of the football marathon.

We must pay tribute to these gymnastics specialists. Today, they are the first in football!..

In the course of the AGF Football Cup “Gymball Challenge”, the teams were being supported by the female coaching staff of gymnastics family cheered the players in the way, usually heard around a beige square floor rather than on a green rectangular field.

Along with ”Məşqçilər”, five teams took part in the event which becomes a tradition: MGA (the staff of the National Gymnastics Arena, last year's champion), AGF (collective of Azerbaijan Gymnastics Federation), BGM (team of  Baku Gymnastics School  - who joined the tournament for the first time) and "Mühafizə" (MGA security staff).

Congratulations to the winners! See you in the next AGF Cup!