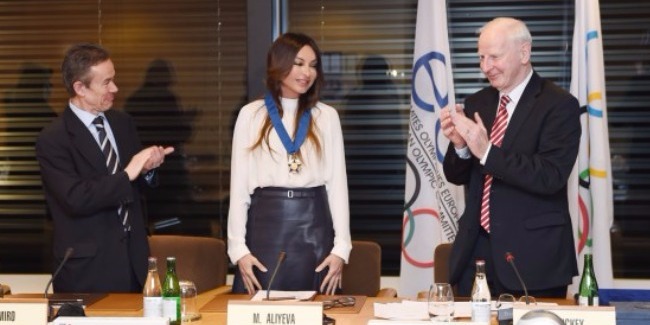 There was held a regular meeting of the Executive Committee of the European Olympic Committees in "Olympic" Lausanne (Switzerland) on January 21. In the course of the meeting, First Lady of Azerbaijan, President of Azerbaijan Gymnastics Federation, Mrs. Mehriban Aliyeva, was awarded with an Order of Merit of the European Olympic Committees for her outstanding services in development of sports in Europe and contribution to the Olympic Movement.

A day later, in the same "Olympic capital", Azerbaijan was entrusted to host the European Championships in Trampoline Gymnastics in 2018 for the first time according to the decision of the Executive Committee of the European Union of Gymnastics.

Thanks to the attention paid by the country’s President Ilham Aliyev to the development of sports in Azerbaijan and creation of sports infrastructure, Baku has become a stable venue for major sporting events.

So, it is quite natural that a caravan of competitors of 2016 Olympic year’s first World Cup series in Artistic Gymnastics (February 19-21) and Trampoline Gymnastics (March 5-6) sets out from Baku. And, on July 22-24, while athletes and sport fans will impatiently be counting down the days left to the start of the Olympic Games in Rio de Janeiro, our city will become a shelter for rhythmic gymnasts, still having an opportunity to try out the whole program of performances at the World Cup final.