Another good news from the FIG Congress! 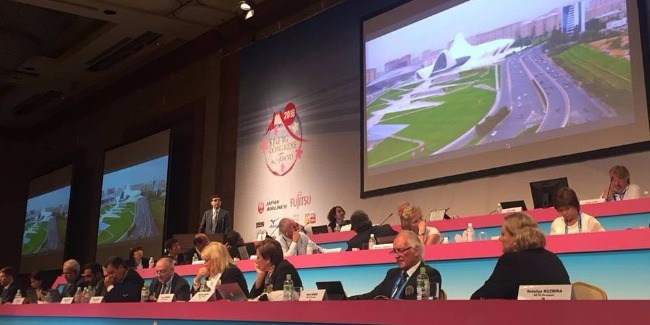 Elections to the Appeal Tribunal of the International Federation of Gymnastics (FIG) took place on the second day of the 81st Congress held in Tokyo. Mehman Aliyev, International Relations Manager of Azerbaijan Gymnastics Federation (AGF), was elected as a member of the tribunal concerned, having received 64 votes. It should be mentioned that Mehman Aliyev was a member of the FIG Disciplinary Commission previously.

Having comprised of 5 elected members, the Appeal Tribunal considers the appeals of the parties who do not agree with the decisions taken by the FIG Presidential Commission, Congress, Council and Disciplinary Commission.The supreme and final instance after the FIG Appeal Tribunal is the Court of Arbitration for Sport (CAS) in Switzerland.

It should be emphasized that there have been held FIG presidential elections at the Congress today. Bruno Grandi (ITA), who has been leading the FIG for 20 years, did not nominate his candidature for the presidential elections this time. Thus, President of Japan Gymnastics Association Morinari Watanabe was elected as a new president between the two candidates by a majority.

Following the voting,VasilyTitov (RUS) was elected as the FIG’s 1st Vice-president, as well as Nellie Kim (BLR) and Luo Chaoyi (CHN) became the Vice-presidents.

At this Congress, the members of the Executive Committee and Council, Presidents and members of the Technical Committees in gymnastics disciplines, as well as the FIG auditors, who serve within the next 2017-2020 Olympic Cycle, were determined as well.