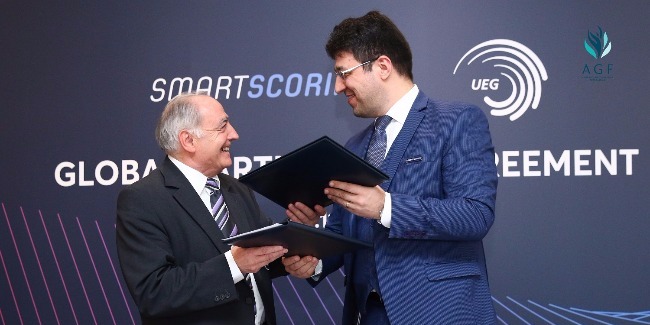 Representatives of the UEG met with the CEO of SmartScoring in Baku (AZE) to discuss the collaboration and sign the contract.

The Milli Gimnastikası Arenası (National Gymnastics Arena) hosted both parties today for the signing ceremony. The UEG was represented by its President Georges Guelzec and General Director Kirsi Erofejeff-Engman. After fruitful discussions with the CEO of SmartScoring Emin Mukhtarov, the innovative Azerbaijani scoring company became the latest partner of European Gymnastics.

SmartScoring consists of a highly skilled team of professionals who share a long term vision and a modern approach to development and best practices. Cooperating with Azerbaijan Gymnastics Federation and other national Federations, as well as being official timekeeper at events like the 42nd Chess Olympiad, Smart Scoring is the young company gained valuable experience that they are eager to expand to the European gymnastics events. From 1 January 2017, Smart Scoring will provide the development and production of the electronic scoring and judging system, as well as timing and accreditation systems needed for the organisation of the 4 European Championships on the schedule. SmartScoring services also include video control, which is a constituent part of the entire system and one of the main requirements for the organisation of competitions at such level.

"Every athlete wishes to raise the flag of their country at the most prestigious international championships. At the same time, our team always tends to be on top - and here we have the accuracy of numbers, excellent reliability of calculation system and indisputability of the results," said SmartScoring’s CEO Emin Mukhtarov, who - earlier this week - listened carefully to all the remarks of the UEG’s TC Presidents during the discussions and workshops, in order to fully understand the needs of each discipline.

UEG President Georges Guelzec has also expressed his confidence in the successful cooperation with this ambitious Azerbaijani company: “SmartScoring already has a positive experience in rendering services at sports events. The team has successfully provided the scoring system and video control of the World Cup series in Artistic and Trampoline Gymnastics, as well as the Rhythmic Gymnastics World Cup Final. Moreover, Azerbaijani gymnast Ayshan Bayramova is the official ambassador of SmartScoring, which attaches gracefulness and elegance to our cooperation. And I am confident that this Contract will lead us to a new level and open further opportunities for the development of the brand and the sport across the continent.”