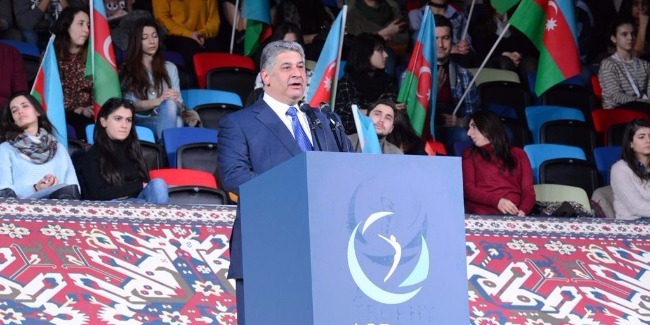 "The FIG World Cup in Trampoline Gymnastics and Tumbling in Baku will play an important role in the development and promotion of these gymnastics disciplines in Azerbaijan," country’s Minister of Youth and Sports Azad Rahimov said.

He made the remarks on February 18 at the opening ceremony of the FIG World Cup in Trampoline Gymnastics and Tumbling. In the contemporary world, Azerbaijan is internationally recognized as a sports country, he said, adding that such a progress of sports in Azerbaijan is also in the spotlight of the international community.

“Consequently, our country has become a venue for very prestigious international events,” the minister said. “The First European Games, the World Chess Olympiad, the UEFA European Under-17 Championship, the European Formula 1 Grand Prix, the World and European Championships and international tournaments have been organised in our country at the highest level meeting all contemporary requirements.”

“Namely for this reason, international sports organizations with pleasure entrust our country hosting of such events on a regular basis,” he noted. “In order to justify this confidence, we are making efforts to carry out our duties in a worthy manner under special attention and leadership of the head of state, President of the National Olympic Committee of Azerbaijan Ilham Aliyev.”

The organization of international competitions according to secure and fair principles once more proves that there are no bounds in sport and it has vast geography, he added.
“Namely due to this fact, our country has also been entrusted to host such prestigious events as the IV Islamic Solidarity Games, the FIG Trampoline Gymnastics and Tumbling World Cup in 2017,” Azerbaijani minister said. “I am confident that we will also hold these competitions at the highest level.”

Trampoline gymnastics and tumbling is favourite sports discipline that attracts the large audience in the world, including Azerbaijan, he noted.

“I would like to emphasize that attention and interest shown in all gymnastics disciplines as well as in trampoline gymnastics and tumbling is significantly increased after election of First Lady of Azerbaijan, president of the Heydar Aliyev Foundation, MP Mehriban Aliyeva as the president of Azerbaijan Gymnastics Federation,” Rahimov said. “As a result, all events are organized at high level and turn into sports festival.”

“Taking this opportunity, on behalf of sports community, I would like to express my deep gratitude to the country’s president Ilham Aliyev and First Lady Mehriban Aliyeva for their attention and care shown to sports in Azerbaijan,” the minister noted.

The World Cup in Trampoline Gymnastics, development of which commenced in Azerbaijan from late 2013, is held in the country for the second time, while Azerbaijan is hosting tumbling events for the first time, Rahimov added.

“I would like to thank the leadership of the International Federation of Gymnastics for its facilitation to the organization of such prestigious events in our republic,” he said, adding that these competitions with a participation of athletes from 15 countries of the world will create favourable conditions for the athletes to gain experience.

“I am confident that these competitions will become an unforgettable event for the spectators and fans, who came to watch the competitions,” Rahimov said.

“I also believe that the athletes trying out their routines at the World Cup will also demonstrate their skills at the Trampoline Gymnastics World Championships and World Age Group Competitions to be held in Bulgarian Sofia city Nov. 9-19,” he noted. “I wish each athlete to compete with dignity and win a victory.”