Our acrobats win the gold and silver medals 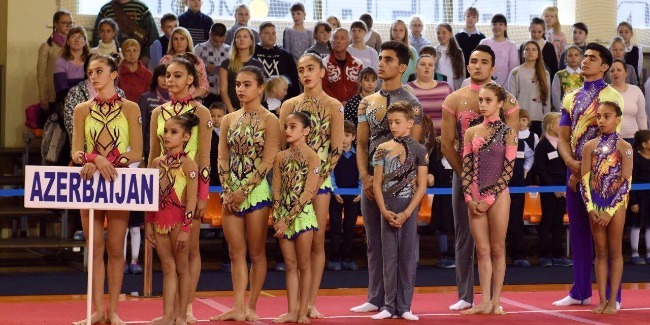 The "Zolotov Cup" International Tournament in Acrobatic Gymnastics was held in Veliky Novgorod, Russia, on September 7-9.

Members of our National Team, who set out for Russia to represent our country, won 3 medals having demonstrated successful performances. Thus, an assessment of the judges with the highest score (83.400) of the compositions executed by our Men’s Pair consisting of Murad Rafiyev and Daniel Abbasov in the age group of 11-16-year-old athletes, mounted our acrobats to the first step of the podium.

Our Mixed Pair - Ruhidil Gurbanli and Abdulla Al-Mashaykhi -  performing in the age group of 13-19-year-olds, won the Silver medal with 85.450 points, having left behind only by the German pair. Another pair Nurjan Jabbarli and Aghasif Rahimov, performing in the same age group, ranked 4th.

The last medal came from our Women’s Group. Emiliya Nazarli, Laman Mammadova and Raziya Seyidli, belonging to the age category of 12-19-year-olds, were honoured with Silver medals.