Another bronze medal on the European Championships’ last day 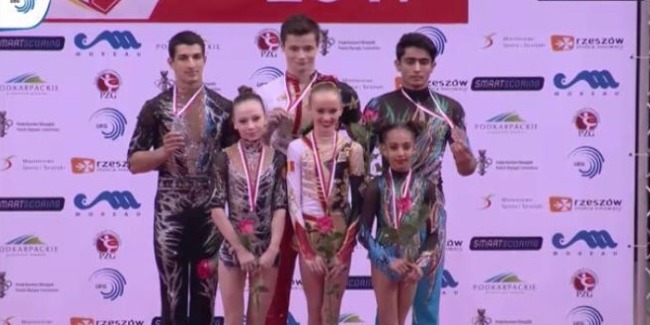 On the last day of the competitions, our Mixed Pair consisting of Abdulla Al-Mashaykhi and Ruhidil Gurbanli added the third Bronze medal into our team’s medal box with their performance in the Dynamic Final. It was the first time when our Mixed Pair was competing among the strongest ones at the Continental Championships in their personal sports career. Nevertheless, the confident performances of our young acrobats distinguished themselves and they reached the final from the 7th place in the Qualification. At the decisive stage, Abdulla and Ruhidil, having demonstrated even more successful exercises, managed to find themselves among the medal winners.

It should be mentioned that 23 Mixed Pairs were competing at the European Championships. Both of our Mixed Pairs - Aghasif Rahimov-Nurjan Jabbarli, Abdulla Al-Mashaykhi-Ruhidil Gurbanli - representing our country, won three medals in total out of 3 possible finals at the end of the 4-day exciting performances.